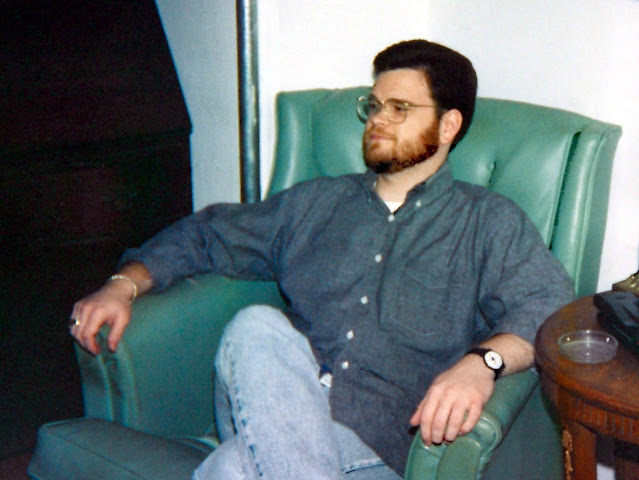 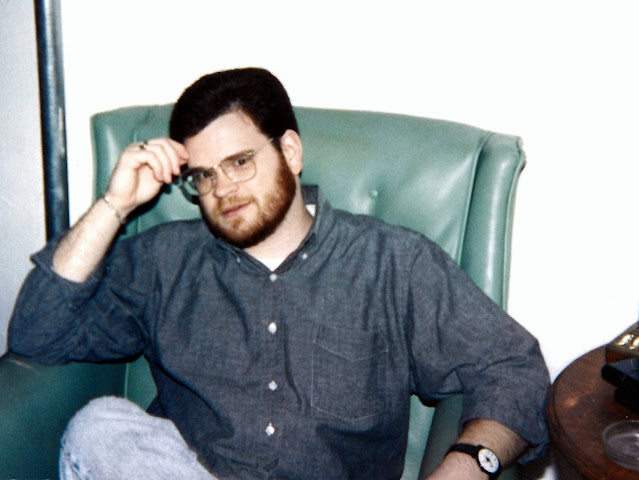 Man, I used to be young!

These two pictures, showing me without a trace of gray in my hair or beard, were taken in my friend Pearl's apartment, almost certainly by Pearl, thirty years ago in 1992. (It may well have been 1993, but "twenty-nine years ago" doesn't have a satisfying evenness to it. So let's stick with 1992.) I was all of twenty-five years old – practically still a kid! (Unless I was twenty-six, but again that isn't as satisfying a number – but a twenty-six-year-old is also practically a kid.)

I'm still wearing those large-framed glasses that I got back when I had really long and thick hair. The frames didn't seem so large when I first got them, amongst all that hair, but as my college graduation approached, I got my hair cut in a (misguided) attempt at looking respectable (just a couple of years before these pictures were taken, actually), and with the shorter hair the frames looked too big. To me now, anyway – I guess I didn't mind then, though, because I kept those glasses for a really long time, I think over ten years. One of the perks of being young – as I used to be, once upon a time; did I mention that? – is that your eyes don't change much from year to year, and you can keep the same glasses for a decade. Now I wear "progressive" lenses (which doesn't mean they're in favor of LGBTQ rights or gun control, though being my glasses they'd damn well better be; it means they're like bifocals – you know, old folks' glasses – but without the line) but less than a year after getting my current pair, I can barely read with them on. (Thankfully I can see just fine to drive, though.)

When these pictures were taken I'd been working at ExecuTrain for a couple of years. The shirt I'm wearing, a charcoal-gray button-down dress shirt, was one of my work shirts; I tried to shake things up by never wearing plain old white dress shirts. In fact, I had a decent collection of plaid, checked, and denim dress shirts; I fancied myself something of a sartorial iconoclast, a rebel – but really I wasn't. Especially since at work I had to wear a tie and dress pants, which I did loyally for several years (my idea of "dress pants" then was mostly khakis, either tan, olive, or navy, but they were close enough to dress pants and I wasn't alone in wearing them). This picture was probably taken on a Saturday night, so I didn't need my tie or khakis.

I'd like to add that, in addition to a decent collection of plaid, checked, and denim dress shirts, I had a good collection of cartoon and novelty ties – Sesame Street ties, Peanuts ties, Dr. Seuss ties – and a decent amount of Christmas ties. I still have many of them today, and sometimes I actually miss wearing a tie every day. Until I put one on, that is; then I don't miss it so much.

Speaking of clothing, I entered the corporate world at the end of an era; when I started at ExecuTrain in 1990, most of my male coworkers wore suits – or at least dress shirts and khakis, like me – and women were required to wear, by the old fashioned and even-then-out-of-date dress code, dresses or skirts – definitely not pants or pant suits. A decade later, I could have worn just what I'm wearing in this picture to work. In fact, there were times in the early 2000s when I could have worn what I'm wearing in these pictures to work and been overdressed, since some of my coworkers would occasionally wear shorts and T-shirts.

Posted by Chris Burdett at 3:15 PM