1995: A Saturday Night at ExecuTrain

It's dark outside. Sitting at my desk, not actually working, I can't see the lake that my office window overlooks, but I can see my own reflection in the window, and the reflection of my office and all the stuff in it. From my computer's CD player and speakers Ella Fitzgerald sings "Oh, Lady Be Good." [I realize now, more than twenty-five years later, that she was still alive then, though only for a few more months.] I love that album – The Songbooks (a compilation of some of the best songs from Fitzgerald's "Songbooks" recordings for Verve). I borrowed that CD so many times from my friend and coworker Chris Luse that my boss, Karen, gave me my own copy for my birthday. Ella Fitzgerald and jazz are still new to me, and I love this form of music that is so different from what I grew up listening to.

It's Saturday night and I am at work in my office at ExecuTrain in Alpharetta, Georgia. I'm twenty-eight years old. During a lot of weekday afternoons, when I otherwise would be at work, I go out looking for a house to buy, my first house, which I will borrow from my 401(k) to purchase. [The house I ultimately picked was that blue two-story in Lawrenceville, the one I lived in when I first met Anna, and in which we lived for the first three years of our marriage.] The arrangement I have with Karen is that I can leave work early in the afternoon to go house-hunting with my real-estate agent, Evelyn, provided that I still get all my work done and meet my deadlines. That is why, despite being in what is typically a Monday through Friday job, I am at work on a Saturday night.

My friend Kevin is here, too, working in his own office a few doors down from mine. He has an arrangement like mine with his boss, Jason, except instead of looking for a house – he and his wife Lisa already have a house – he is working on his Ph.D. at Georgia State. [I didn't know this at the time, of course, but a little less than a year later Kevin would have a heart attack, from which he recovered fully, but which was the first manifestation, as far as I know, of the years-long struggle with heart problems that would ultimately end his life, twenty-three years later.] I wish I could spend the whole evening hanging out in Kevin's office and talking about the things we like to talk about--books, music, Rocky & Bullwinkle, and sometimes even work--but we both have a lot to do.

So we are in our offices working. Right now, in this moment [and from the present I am writing in, as opposed to the present I am writing about, "this moment" is actually a quarter of a century ago], before any of what I know will happen to us happens, Kevin and I are both young – I have yet to turn thirty; Kevin is still five years away from forty – and healthy, and we have years of living before us. We have a lot to do; we are at work on a Saturday night; it is dark outside, and we cannot see the lake that's just outside our office windows.

Posted by Chris Burdett at 8:26 PM No comments:

The bathrooms in the building I teach in on Tuesday nights have mirrors that face other mirrors, so that one sink is reflected in one mirror, and that image is reflected in the opposite mirror, and so on, so that if you see it from the right angle there appears to be an infinite number of sinks--and counters, and paper towel dispensers--curving up all the way, one might imagine, to heaven. 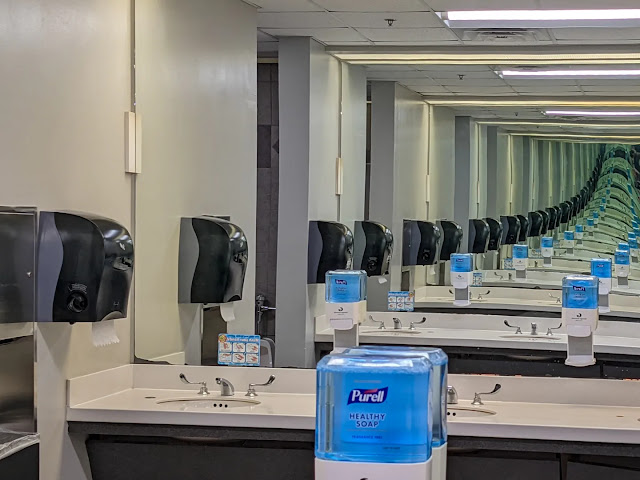 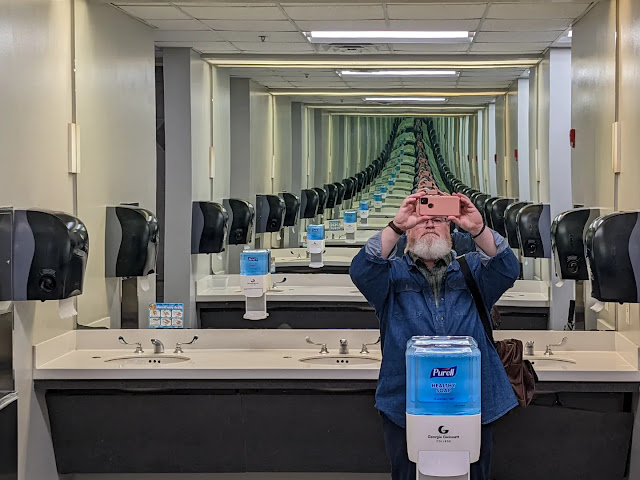 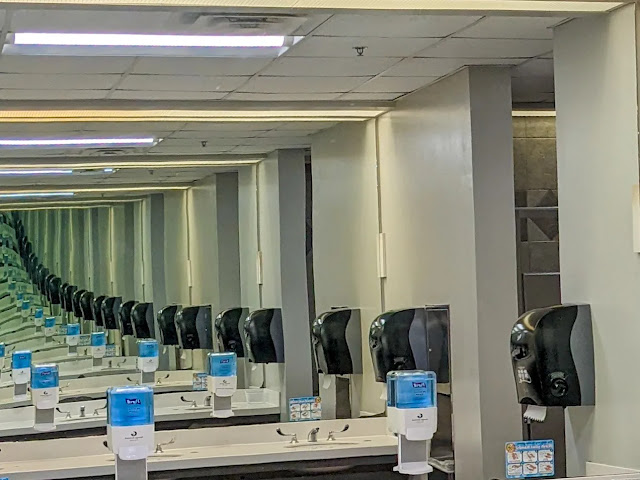 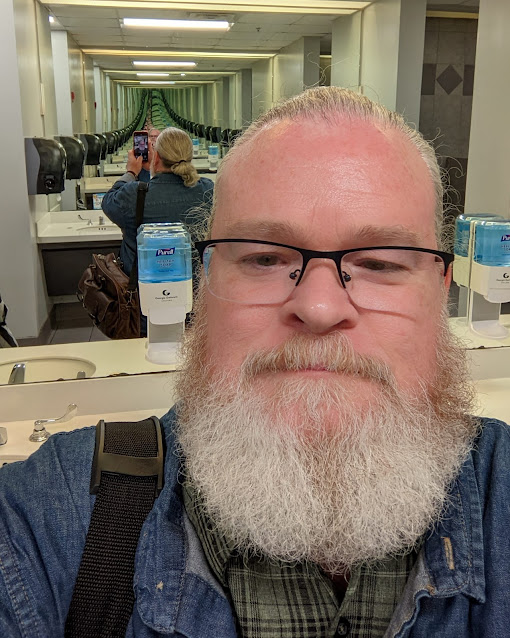 Posted by Chris Burdett at 11:30 PM No comments: