Earlier tonight Elyse and I were in the back yard taking pictures, and we found this guy on the fence:

He did several impressive throat displays at us; whether this meant he saw us as rivals or potential mates, I'm not sure; probably the former:

Elyse took several pictures of him, even though his dewlap kind of freaked her out:

Easter (and My Birthday)

Today we went to Granny and Pa's house (that is, my parents' house) for Easter, and also to celebrate my birthday. Here's the cake my wonderful wife baked (and my kids helped decorate) for my birthday; you can't tell, but it's red velvet:

Here's the supper table before anyone sat down to eat:

and Jessica's bizarre biscuit and ham and whatever-that-thing-is creation:

The girls talking after the meal:

Though it probably won't be long before she's too old for it, Jessica participates in the Easter Egg Hunt with great enthusiasm:

Annie taking a picture of the girls:

Elyse's haul for the day:

I snapped this selfie to record what I look like at the age of fifty, on Easter:

Before we left, Elyse and Jessica put on a show for us; Elyse was the dancer, and Jessica (unseen in any of these photographs but definitely heard by those who were there) was the choreographer:

Happy Birthday to Me!

Today, much to my own amazement, I turned fifty years old!

Which means that forty-nine years ago, I turned one:

and forty-six years ago, I turned four: 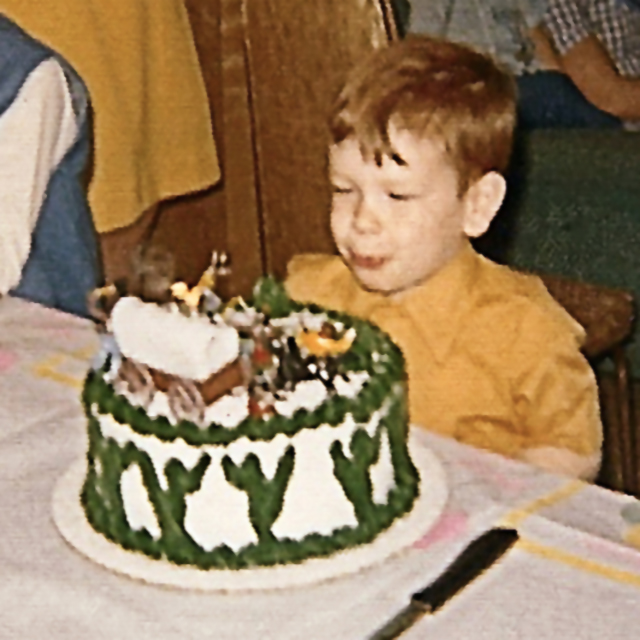 I don't have any pictures of me blowing out candles today, but I do have these of the birthday cookie Anna got for me:

And these pictures of a couple of my presents, a painting from Elyse and a Peanuts-themed present from Pearl (whom I met for lunch today at Lenox):

Dinosaur Explore (and Lots of Other Stuff) at Stone Mountain

Today (the last day of Anna's and the girls' spring break) we went to Stone Mountain to (among other things) see their current Dinosaur Explore attraction ("New & Only in 2017" the Web site tells us). The girls were a little nervous about seeing the dinosaurs, so we started at the Historic Square, formerly called the Plantation:

This is Jessica taking a picture of Elyse with Mommy's cell phone; maybe later I'll get that picture and post it here:

This is me taking a picture of me:

There was an Easter Clown Bubble Lady there, who delighted Elyse and bothered Jessica:

At this point, Elyse and Mommy were actually leaving Dinosaur Explore near the end of our visit, but I put it here first as a kind of establishing shot:

Jessica, the Dino Ranger (no relation to our own Jessica), greets people as they enter Dinosaur Explore. Here she's posing for a picture with somebody else's kids (I cropped the other kids out because I wouldn't want some strange guy posting pictures of MY kids on his blog):

Inside there are lots of roaring life-size animatronic dinosaurs, slowly swishing their tails and turning their heads and, in some cases, opening their jaws to reveal large, pointy teeth which could be scary if the jaws didn't open so slowly and with such clockwork regularity; they alternately frightened and intrigued the girls:

Inside what used to be the Great Barn there is now a dino-themed play area called the Dinotorium, which was crowded and noisy and all the things Jessica hates, so I wasn't inside any longer than it took to take this picture and get dragged out (which was about long enough for me, frankly):

After seeing the dinosaurs, we got candy in the Crossroads candy store (one of our traditions), and sat outside the train depot to eat it:

This afternoon we drove twenty miles north to Fort Yargo State Park to wander around for a while at the Fort Yargo Living History Society 18th Century Market Faire. (It was kind of like a renaissance festival set four hundred years later.)

The girls each picked out a fan to buy:

I don't know if any of the plates and pottery were actually made by this vendor or not, but they were beautiful:

I believe much of the live music was provided by the Gwinnoters, the Gwinnett chapter of the North Georgia Foothills Dulcimer Association; I'm not sure if the banjo and harp and fiddle (not being dulcimers) are part of that group or not:

This lady was cutting silhouettes:

This is me. Since I'm usually the one taking the pictures, I'm often underrepresented on this blog; now that I take most of my pictures with my cell phone, which has a "selfie cam," that is changing:

I'm pretty sure this is the "1792 log fort built by settlers for protection against Creek and Cherokee Indians" that the park's Web site describes, though it doesn't look like the forts I remember seeing on "F-Troop" when I was growing up (which was also around 1792, I believe):

You know who this is: