I'd forgotten about these pictures I took of the spider pumpkin Elyse carved and painted back at the beginning of October.  Pretty cool! (There are also a few uncarved smaller pumpkins--or whatever kind of squash they really are--in these pictures.) 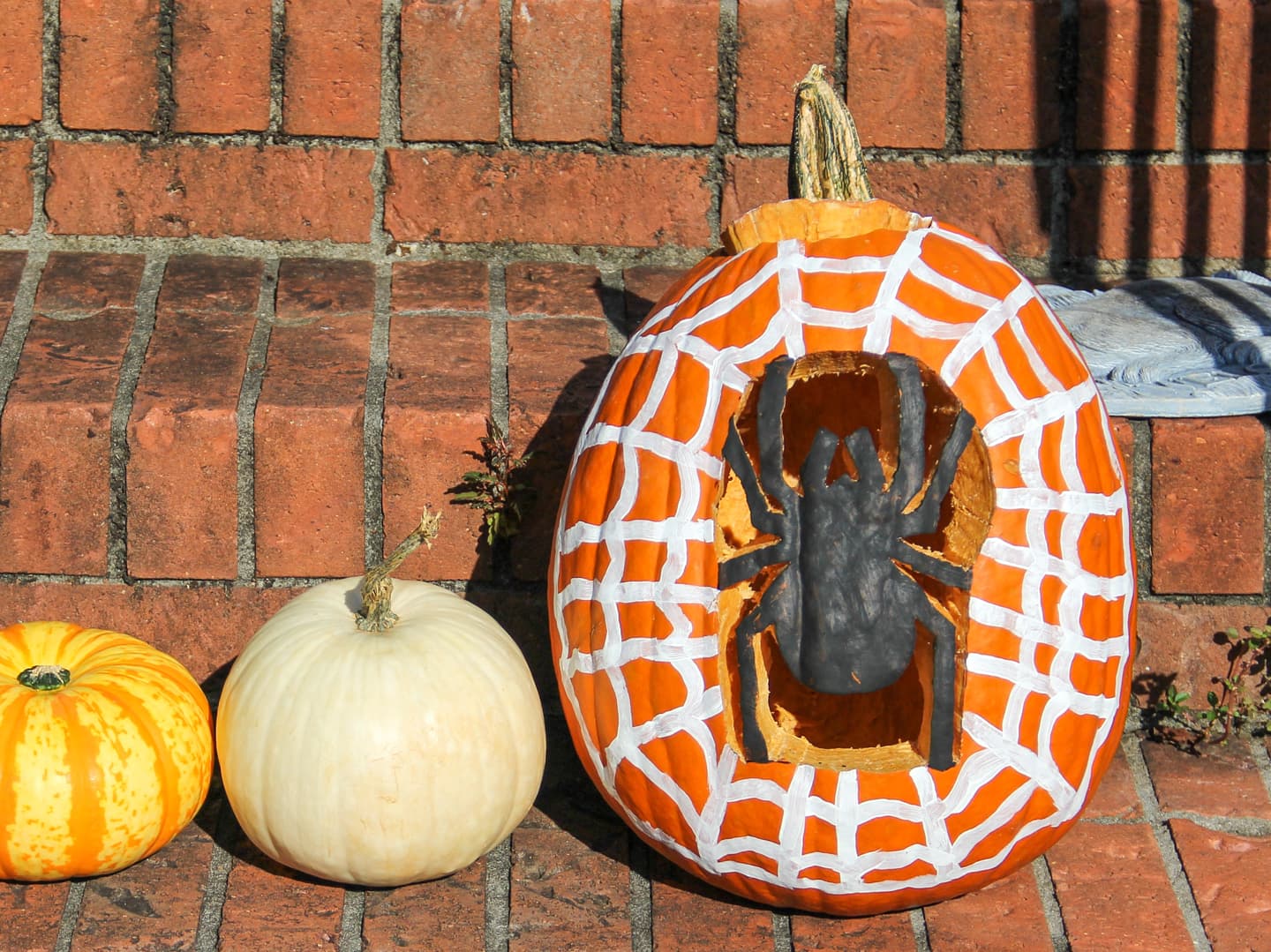 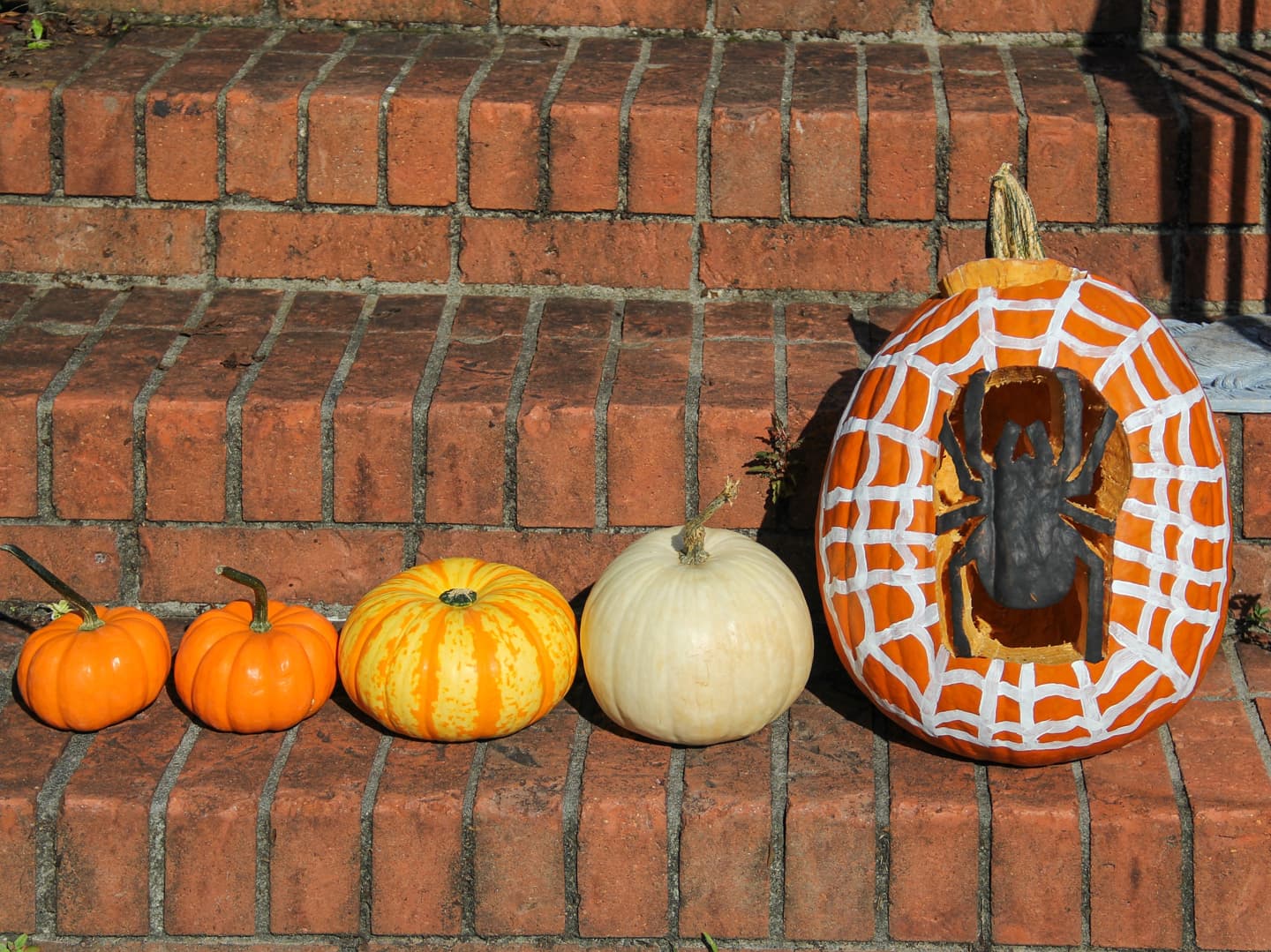 Posted by Chris Burdett at 6:51 AM No comments:

Me at Vines Park

Earlier today, Anna and I went for a walk at Vines Park, and I paused to snap this self portrait in the woods. 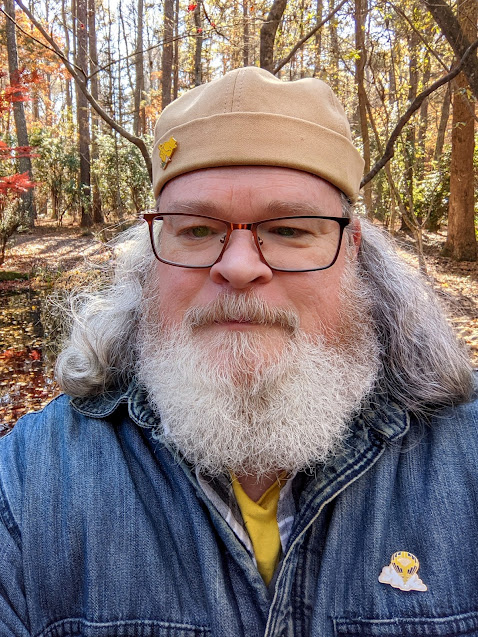 I do have a talent for framing pictures of myself so that it looks like I have antlers, don't I? (Maybe you wouldn't have even noticed that if I hadn't pointed it out. Also, for the record, I don't have antlers. There was just a tree behind me.)

Posted by Chris Burdett at 6:21 PM No comments:

Six Snapshots of a Drive Up US 441 with Jessica

Today, Jessica and I went on a drive up U.S. 441 into the Great Smoky Mountains. (Actually, in the interest of accuracy, I will admit that a lot of it is officially designated as U.S. 23, and some of the way we took I-985. But I prefer to think of it as a drive up 441.)

Here are six snapshots that summarize parts of our trip: 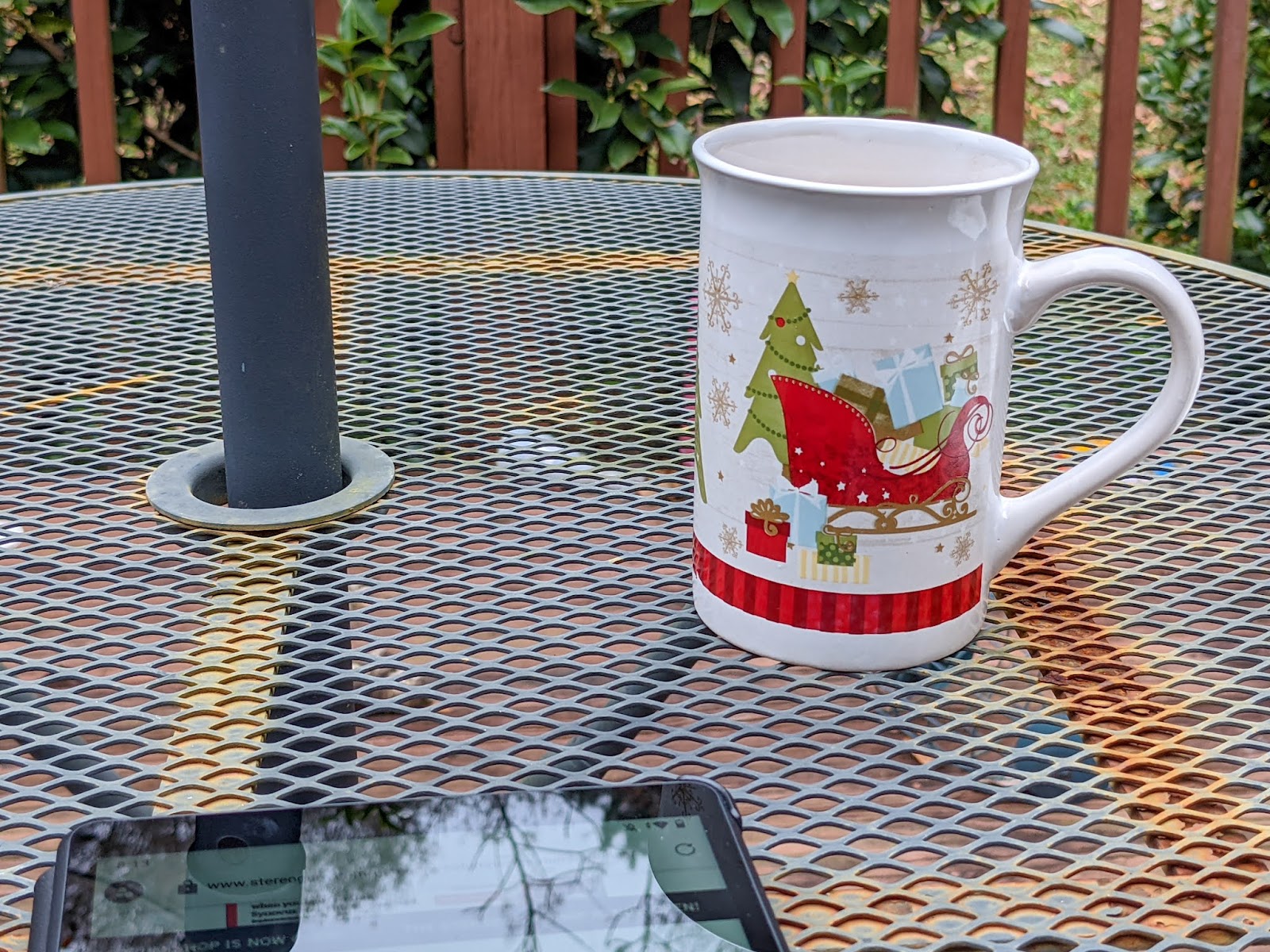 Anna's gone back to bed (after getting up with me at 6:30 to watch the rest of the most recent "Great British Baking Show"), and the kids aren't up yet--or at least haven't come out of their bedrooms--and I'm sitting out on the back deck drinking coffee, being cold, and doing some reading.

Overhead, the sky is a flat gray. It almost looks like, if it were cold enough, it might snow.

Posted by Chris Burdett at 8:47 AM No comments:

Elyse and Mommy Go to the Theater

Tonight, Elyse and Anna got dressed up to go see a Christmas play at the Conyers community theater (the New Depot Players). Here they are before they left: 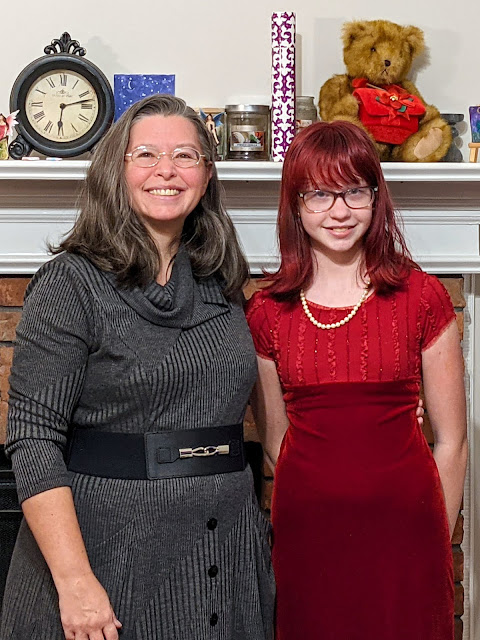 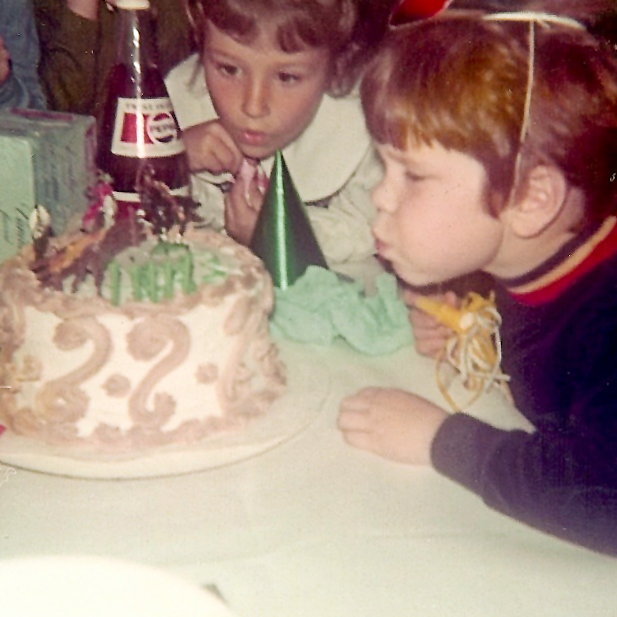 One of the things I notice now, looking at this fifty-year old photograph with the eyes of someone who considers himself to be a decent amateur photographer, with a respectable amount of knowledge about cameras and lenses and how they work, is how close to me the vantage point of this picture appears to be. How did my mother--or whoever took this picture, in the unlikely event it wasn't her--get that close with a fixed-focus Kodak Instamatic camera? Probably she really was just right there with the camera in my face. (It's also possible that this image is a cropped version of a wider original; I can't remember what the actual print looks like right now.)

Whatever the case, this picture certainly does put you right there with me and my birthday cake at this, my fifth birthday party, probably a Saturday afternoon in April, 1972. (I doubt the party was actually on my birthday, though the actual date has probably been lost to history.)

But I do remember this party. It was in the basement of our house in Clarkston, and all my cousins and neighborhood friends and relatives--at least all the ones who didn't have to work, or have some other convenient excuse for getting out of a little boy's birthday party--were there.

What I think I remember--though I admit I may just remember having been told this story over and over so many times that it has the feeling of a genuine memory--is that when I was about to blow out the candles on my cake, my cousin Lorri leaned in and blew them out for me. It was that moment that this picture captures.

What I also think I remember--and this I'm pretty sure is a genuine memory and not an implated one, except that it might have been from the party the year before this one--is that the cake was decorated with a plastic horse and cowboy. Sometime after this party, later the same day or the next day, perhaps, I took them out to play with in the neighborhood, and I left them on the curb a street or two away when Mom called me home for supper. I went out to play with them some more, later that day or maybe the next day, I'm not sure, and I was incredulous that they weren't still there on the curb where I'd left them. Someone stole my horse and cowboy from me! It had genuinely not even occurred to me that someone would do such a thing. But someone did. I think that was the very beginning of my loss of innocence.

One other thing I want to point out in this picture: look at the bottle on the left side of the frame. Pepsi. I have another picture, of another part of the house (the kitchen), at another time (I don't know exactly when), in which a Pepsi bottle is clearly visible. Where we a Pepsi family? Even living in (or near) Atlanta, the birthplace of Coca-Cola? Or maybe there just wasn't a Coke-vs.-Pepsi rivalry back then, and people just bought whatever was most convenient or cheapest. Whatever the explanation, I'm okay with it. To be honest, I slightly prefer Pepsi over Coke; I rather like thinking this bias goes back to when I was just a little kid.

Posted by Chris Burdett at 2:30 PM No comments: 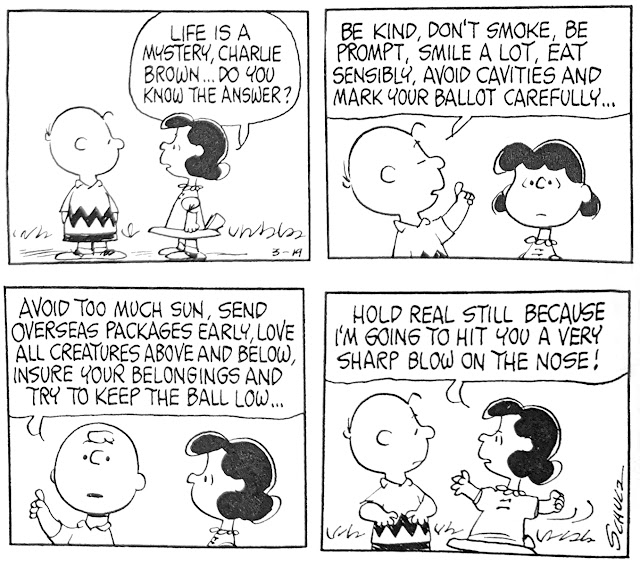 There is quite a bit of wisdom to be gleaned from this exchange between Charlie Brown and Lucy (from March 19, 1969), but I don't think the real takeaway here is "try to keep the ball low." (I think it's something about how often the better choice is to just shrug and say, "It's a mystery to me, too," because, really, the Lucy Van Pelts of the world don't want to hear your answers.)

Posted by Chris Burdett at 8:34 PM No comments:

Me and My Corolla 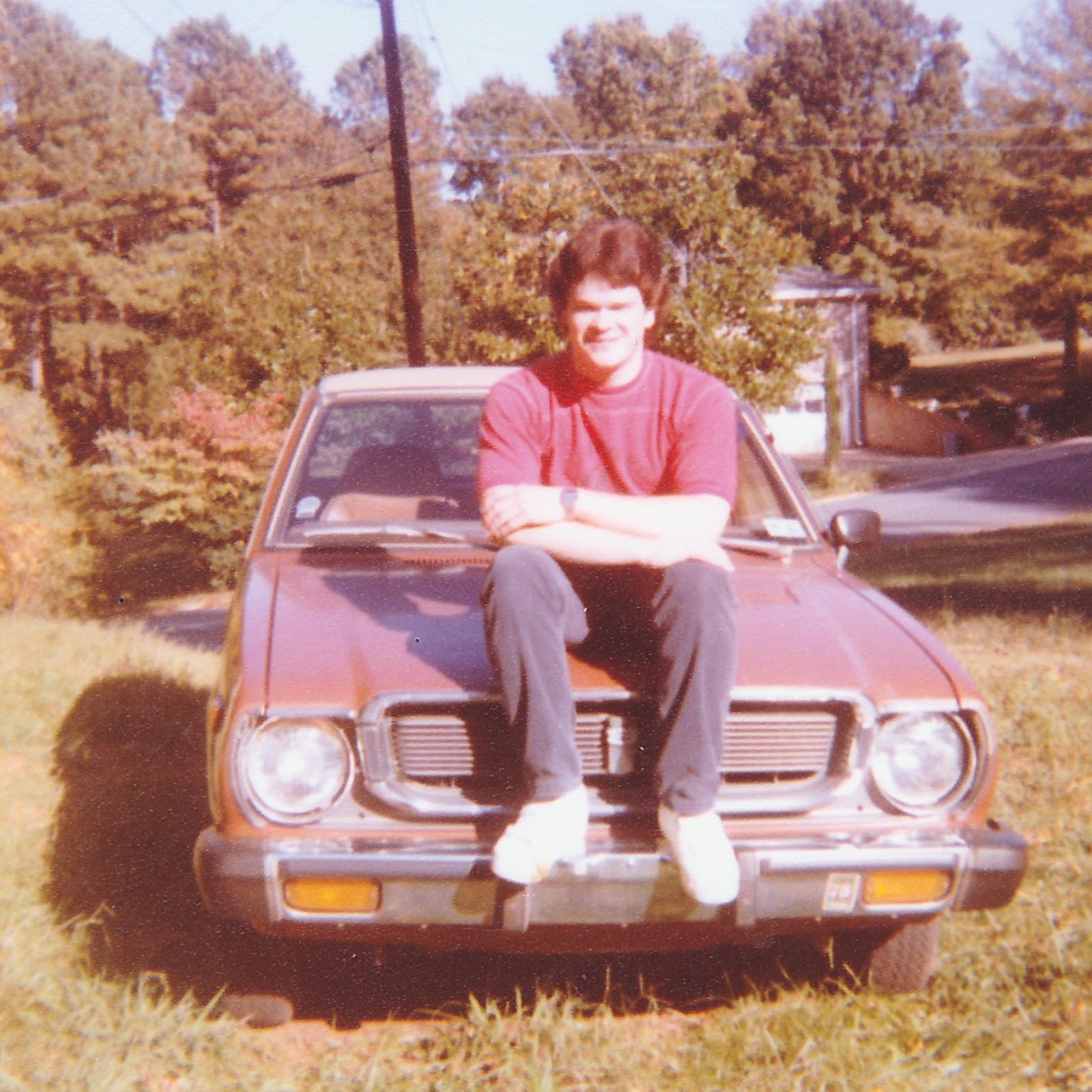 And look at me! I was young and thin and had my whole life ahead of me. I imagine this was taken only a few months after I passed my driver's license test (thirty-eight years ago as I write this…*sigh*). In the picture I'm not wearing glasses, which tells me this was probably a few months into my eleventh-grade year of school, since that is when I got contacts. I'm wearing the same Junkyard Dog shirt I was wearing in a picture I wrote about a few months ago, the one of me and Scott in Granny's house in Tucker. And it's hard to say for sure, but I think I'm wearing a pair of white K-Mart shoes that had Velcro straps to fasten them instead of conventional laces; my high school friend Kirk Brooks used to call them my Sesame Street shoes.

Not long after this was taken--less than a year after I got my license--I would total this car on Lawrenceville Highway in Lilburn, driving myself and my then-girlfriend Laura to my grandmother's house (yes, the one in Tucker), when I failed to notice that the car in front of me had stopped for the red light. It was terrible.

But that fact doesn't prevent me from having great memories of this car.

Posted by Chris Burdett at 3:00 PM No comments: 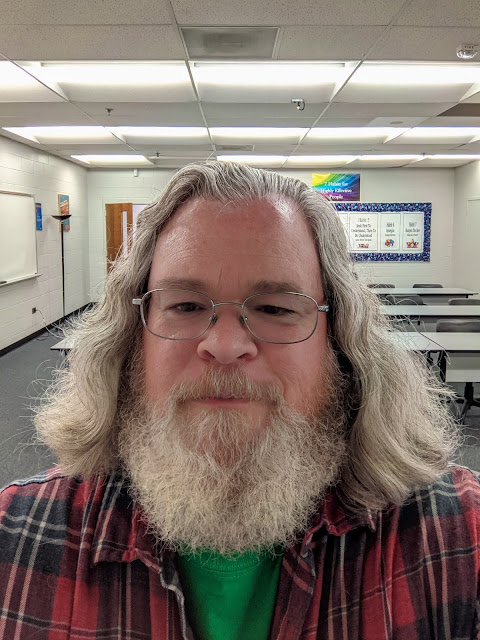 Me, in my Tues 10:00am classroom after all the students left. Do I look like an old hippie English professor? That's kind of what I am. (Kind of--not actually old enough to really have been a hippie, and I probably wouldn't have made a good one anyway, and as an adjunct instructor I probably don't really merit the title "professor." But still...)

(I sent this as a text to Jessica yesterday morning after I taught one class but before the other, and then later posted it on Instagram. I also decided that I might as well publish it here on the blog, too.)

Posted by Chris Burdett at 1:58 PM No comments: 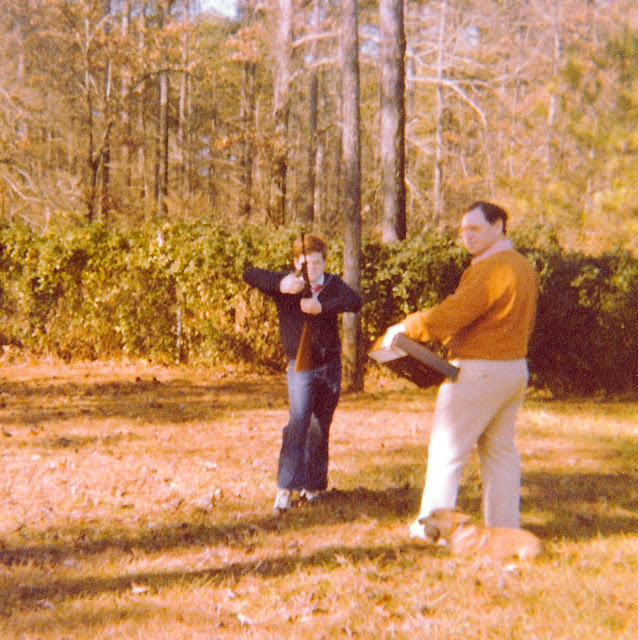 This is me and Dad in the backyard of our house in Lilburn, Christmas morning, probably 1976 or 1977. Pookie, the dog I had all through school, is on the ground behind Dad, with a tennis ball in his mouth.

I can relate to Ralphie, the main character in the great Christmas movie A Christmas Story (with a screenplay by Jean Shepherd, who adapted it from his book In God We Trust, All Others Pay Cash, and who also provided the voice-over narration). Ralphie longed for a B.B. gun, and when I was about that age, so did I. (Though in the interest of accuracy I will point out that that movie didn't come out until a few years after this picture was taken, and I'd never even heard of the book, so I had no idea I had this in common with the fictional Ralphie.) Every issue of Boy's Life magazine back then featured two or three ads for B.B. guns, and I studied those ads every month like I was preparing for a test.

In this picture you can see that, like Ralphie in the movie, I got my wish for Christmas.

The box Dad is holding is a rubber-backed target--at least I'm pretty sure that's what it is--that either came with the gun or Dad bought for me as part of the present. We set it up against the back fence and did some target practice that morning. I did not shoot my eye out. (Or anyone else's, for that matter.)

In case you can't tell what I'm doing in this picture, I'm pumping the gun to build up pressure and fire power. The manual said that ten pumps was supposed to be the maximum, but I'm pretty sure I used to pump it forty or fifty times to send the B.B. extra far and extra hard. I don't think it actually made a difference; I think that whether I gave it ten pumps or fifty, it shot about the same.

I still have this gun--it's out in the garage somewhere, probably nearly covered in spider webs and leaf debris. It doesn't actually shoot anymore. I can say that for sure because about five years I bought a container of B.B.s and loaded it up, but it wouldn't shoot--ten pumps or fifty, it shot (or didn't shoot) about the same. When I pulled the trigger, the gun made a rather unsatisfying PPFFFTT sound, and the B.B. rolled out of the barrel.

This picture must have been taken by my mother, who I don't remember objecting to my owning a B.B. gun the way Ralphie's mother did in the movie. I'm sure she wanted me to be careful--which I was--and I probably got some standard speech about not shooting people or dogs or birds or squirrels--which I never did--but I doubt Mom thought a whole lot about my B.B. gun. I think it was just accepted by then: little boys had B.B. guns.

On a side note, in this picture Dad would have been in his early thirties, twenty years or so younger than I am now. As I think I've written before, one of the remarkable things about looking back at these old pictures and thinking about those times is not just seeing myself as a kid, but seeing my parents and realizing they were practically still kids themselves.

Posted by Chris Burdett at 1:02 PM No comments: