Asheville, North Carolina: Days One and Two: Getting There and Visiting the Biltmore Estate (plus a sixteen-years-later addendum)

Getting There
For the Labor Day weekend, Anna and I had originally planned to go to St. Augustine, Florida, which we had passed through in the pouring rain on the way home from our honeymoon just a couple of months ago. After we realized, though, that we would be driving eight hours there and eight hours back for only a two day vacation, we decided to pick someplace a little closer.

In 1983 my family went through Asheville, North Carolina, on a summer road trip, and I've always wanted to go back. The Biltmore House impressed the heck out of me back then when I was sixteen, and I had fond memories of the town (especially of a used bookstore where I had found a hardback copy of Clifford D. Simak's The Visitors) and the mountains. This weekend, then, was the perfect opportunity to return.

Anna is in graduate school at UGA, and one of her classes this semester meets every other Saturday—from 9:00 a.m. until 3:00 p.m., in fact. Now, I have nothing against Saturday classes, but if you ask me, meeting for six hours on the Saturday of Labor Day weekend stretches the limits of academic dedication. But Anna loves being in school, so I waited patiently at home for her to return so we could head out on our vacation. 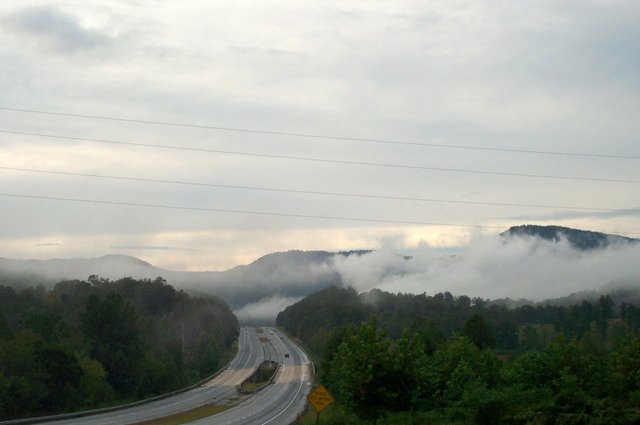 We left around 4:00 Saturday afternoon, had a pleasant drive up I-85 and U.S. 25, and arrived in Asheville around 8:00. We checked into the Asheville Mall Days Inn, unpacked, and then went to the Corner Stone Restaurant for dinner. We were in bed by 10:00.

Sunday Morning Breakfast
Our hotel features a “free hot continental breakfast,” which turned out to be the best free breakfast I've ever gotten at a hotel, with coffee and juice, scrambled eggs, sausage, bacon, biscuits, grits, pancakes, bagels, fruit, cereal, and probably a few other things I've forgotten about. It made getting up at 6:00 on the first day of our vacation worthwhile. By 8:00, our bellies full, we were headed out the door to get a jump on the Labor Day weekend Biltmore Estate tourists crowd.

The Biltmore Estate
Asheville's first settlers, over two hundred years ago, called it “Eden Land.” George Washington Vanderbilt, father of his country and blue-jean magnate, understood that sentiment; in 1888, the twenty-six-year-old Vanderbilt visited Asheville, and deemed it “the most beautiful place in the world.” He decided to live there, and began acquiring land, soon owning over 100,000 acres. In 1889 he began building—or began financing the building of; I doubt George was actually out there driving nails himself—the Biltmore House. The remarkable mansion was completed five years later, making its official debut on Christmas Eve, 1894. 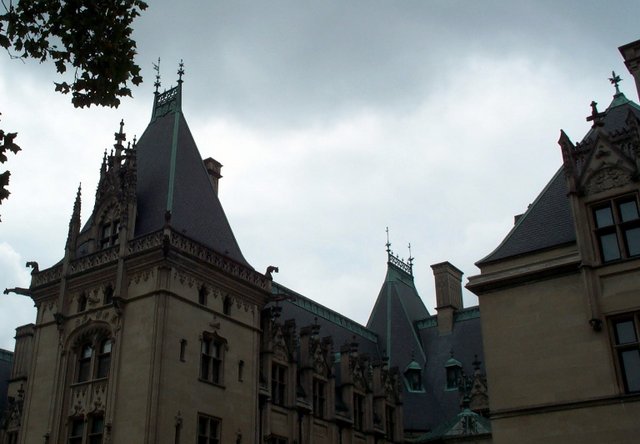 The Biltmore House is the largest home in North America, having four acres of floor space; it has 255 rooms, including 34 bedrooms, 43 bathrooms, a ten-thousand volume library, and a banquet hall I think my whole house would fit in. It also has an indoor swimming pool and a two-lane bowling alley. (And if you get a strike when the red pin's in front, you win a free game! ...Okay, I made that up.)

We parked in lot C and rode the bus to the mansion, enduring the driver's corny jokes about “if these sharp curves in the road make you nervous, just do what I do: close your eyes.” They were doing “timed entry” when we arrived, which means that they give you a card telling you what time you can enter the house; we arrived at 9:30, but got entry cards for 9:15, so we could go right in. 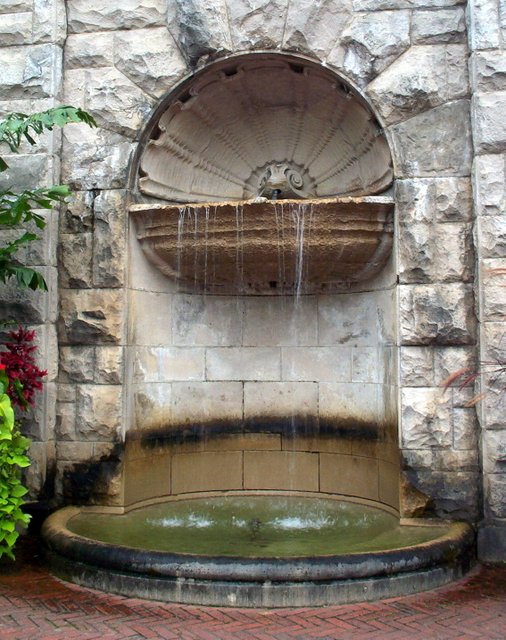 The whole tour through the house took us about two hours, though it's a self guided tour, so you can take however little or much time you want to see it all (within reason, of course; I'm sure that after a few weeks they kick you out). Unfortunately, they don't allow photography or videotaping inside the house, so I can't include any pictures of the inside here, but there are several good representative shots at the Biltmore Estate Web site. The house is stunning in every way. If you're in Asheville any time soon, I recommend you see it. 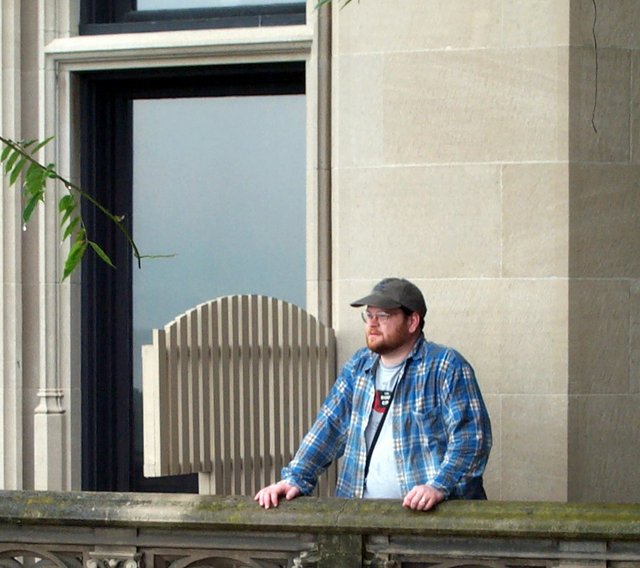 It was cloudy when we were there, and a little chilly, though it didn't start raining until the afternoon (and then, boy did it rain!). It did make for an interesting view of the mountains off in the distance. 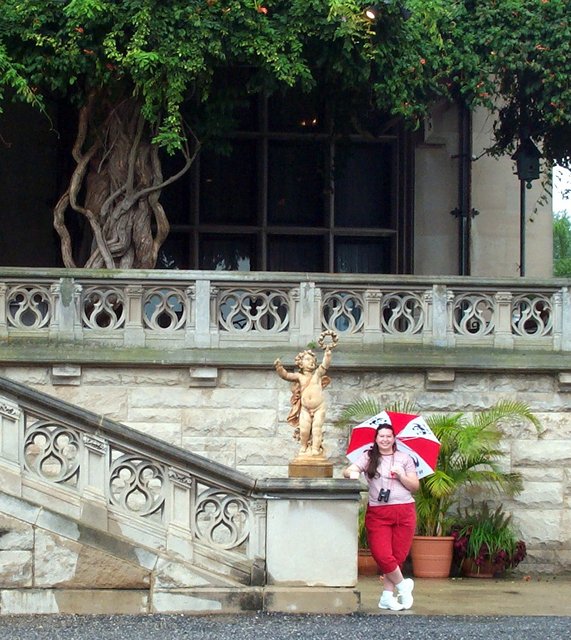 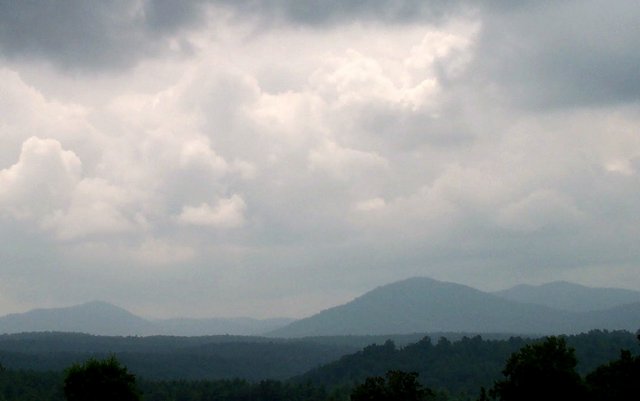 After touring the house, we had some ice cream, looked through a few of the gift shops and made a few purchases, then had some lunch. Then we went down to explore the gardens.

The Biltmore Gardens
The Biltmore estate's grounds were designed by famous landscaper Frederick Law Olmsted. The formal garden area includes a full conservatory (the kind where they do stuff with plants, not the kind where they play music) and 250 acres of landscaped gardens; there's even a bass pond, though we didn't see that. The gardens include all sorts of plants, including many that don't thrive in the North Carolina climate; the conservatory includes a “hot house” and a “cool house” to make them feel right at home. 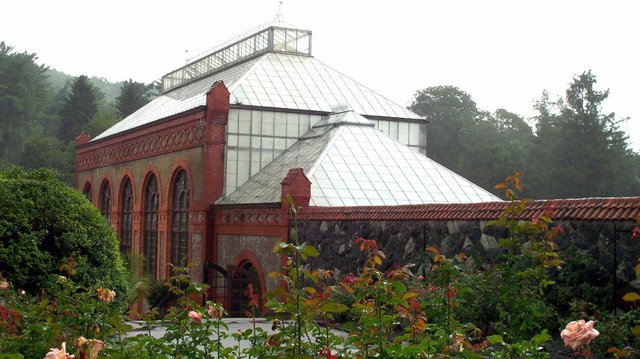 We spent a long time at the gardens, much of it in the rain. That was okay, though; we had an umbrella with us, and when the rain got heavy we slipped back into the conservatory to wait it out. It was a nice way to spend the afternoon, and I took over a hundred pictures. 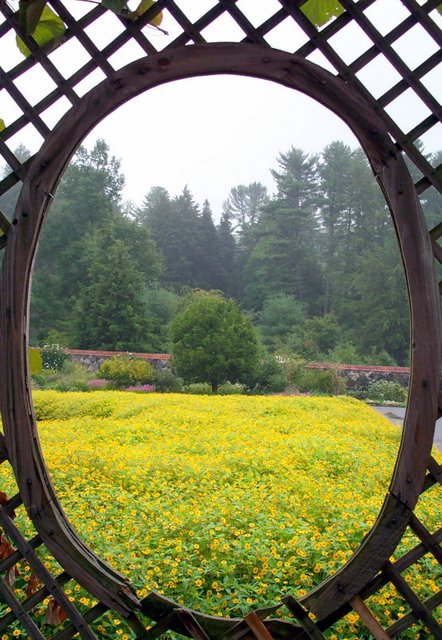 There are places in the gardens where there are so many colors and shapes and textures, you feel like you've found a window into a magical land... 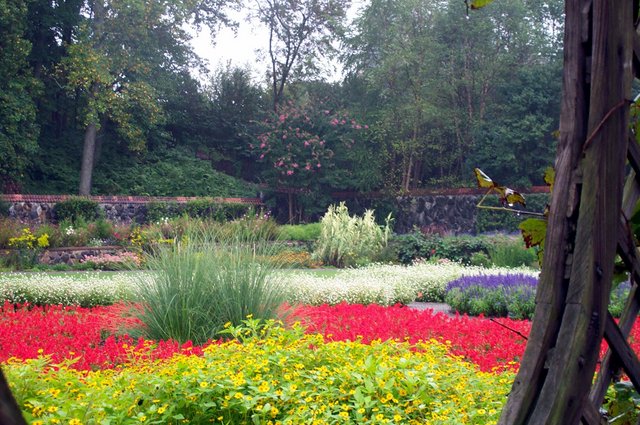 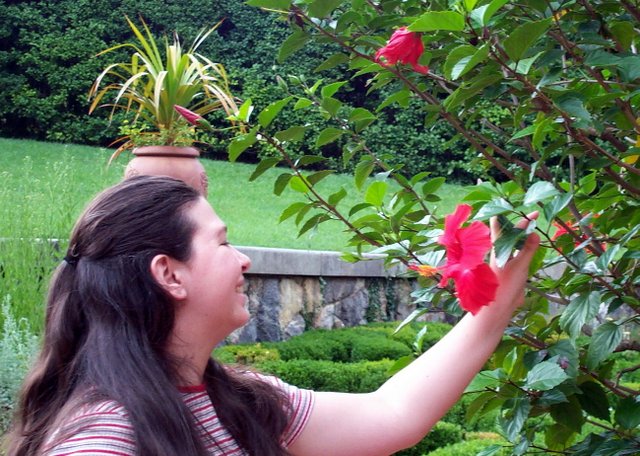 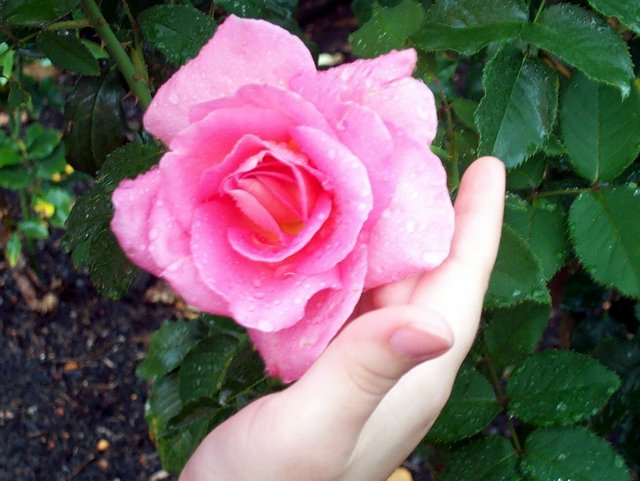 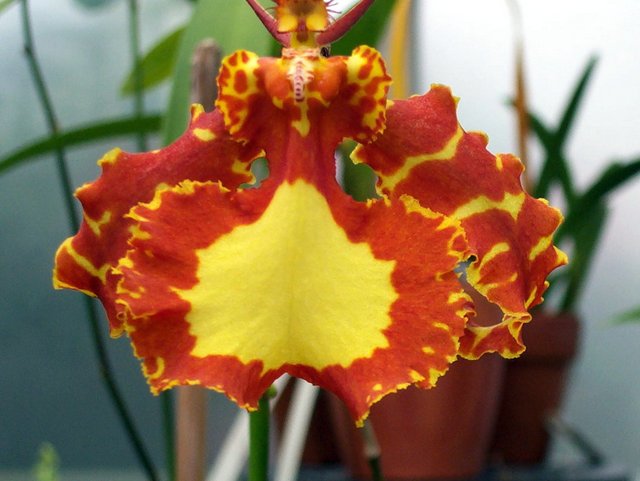 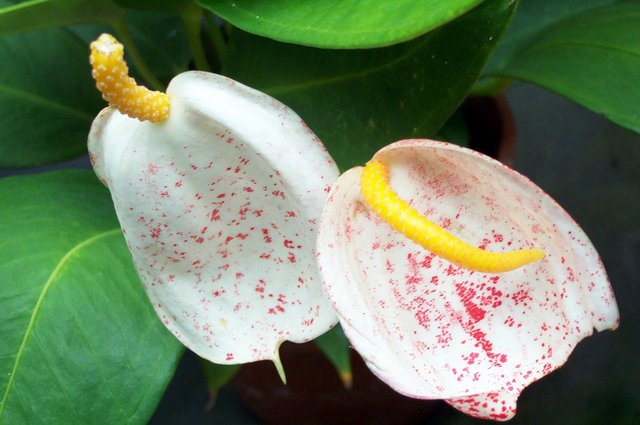 We left the Biltmore Estate a little after 5:00, nearly eight hours after we'd arrived, exhausted and happy. We stopped at Burger King and got some unhealthy dinner to take back to the hotel room with us, and spent the rest of the evening watching TV and looking over the 230 pictures I'd taken throughout the day.

* * *
The above is is all I wrote back in 2001. I never created a post for the third and fourth days of the trip, days on which we went for a little drive on the Blue Ridge Parkway, and then drove home, with a little stop at the Carl Sandburg Home in Flat Rock, NC. I didn't post these pictures then, but now, sixteen years later, I'm adding a few pictures from those days of this trip: 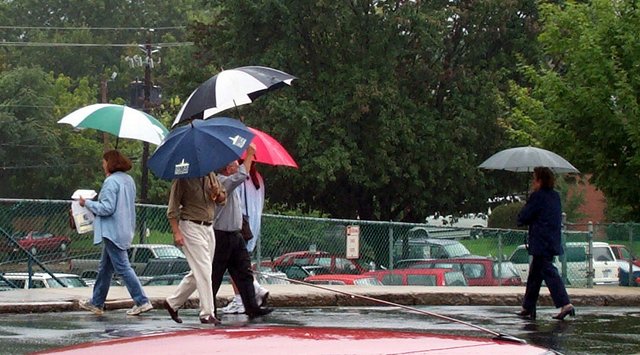 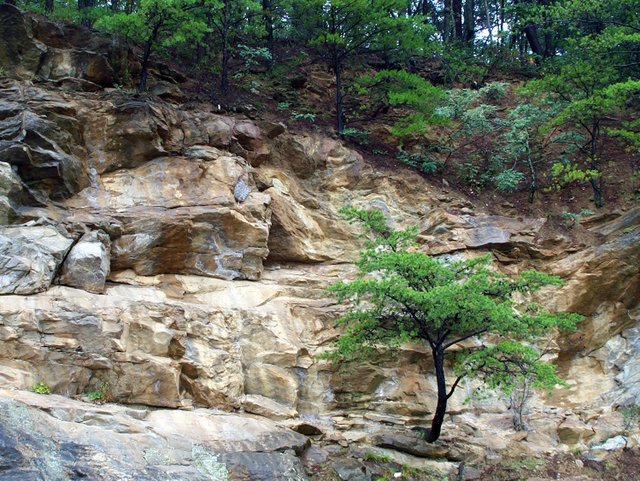 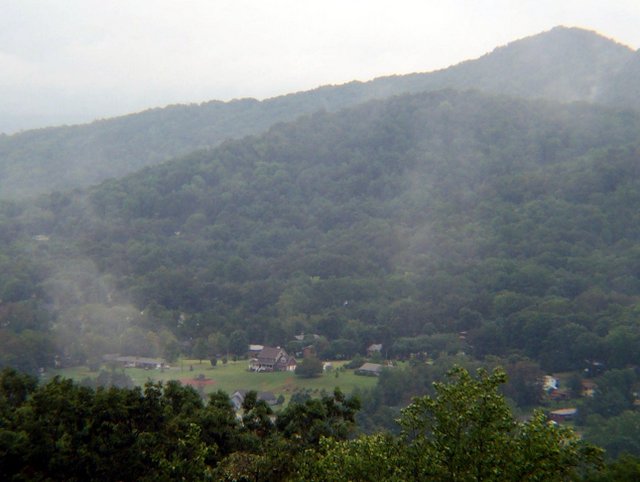 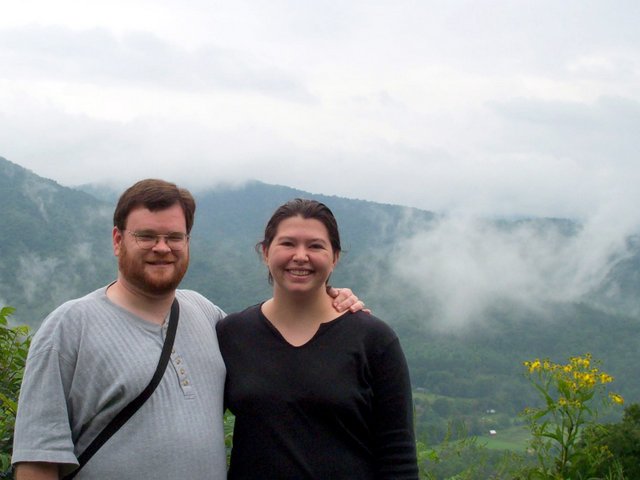 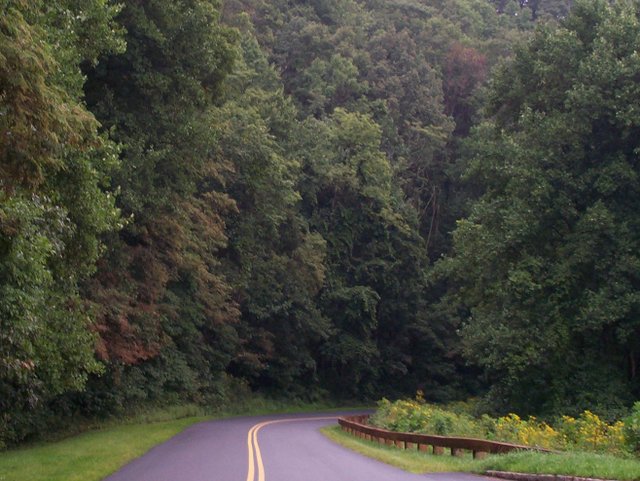 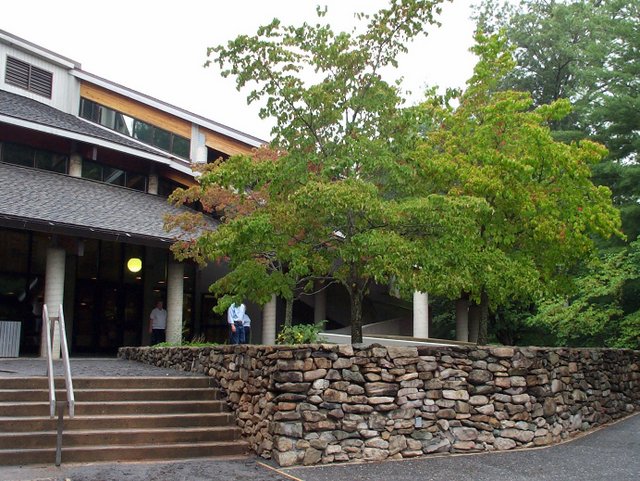 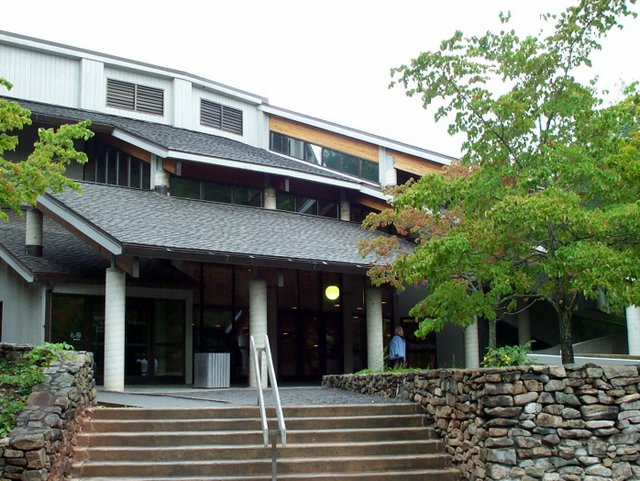 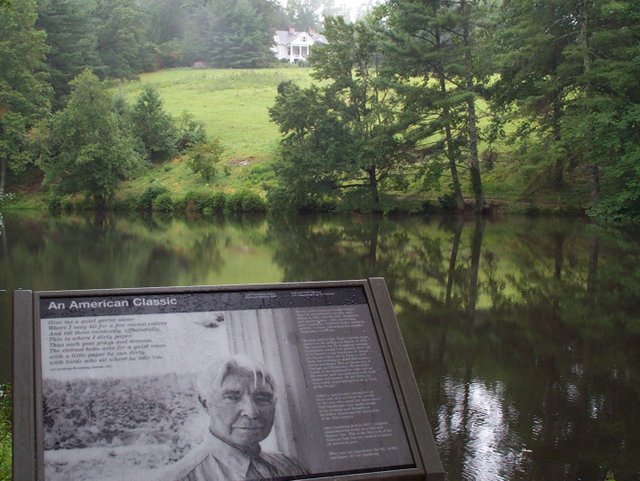 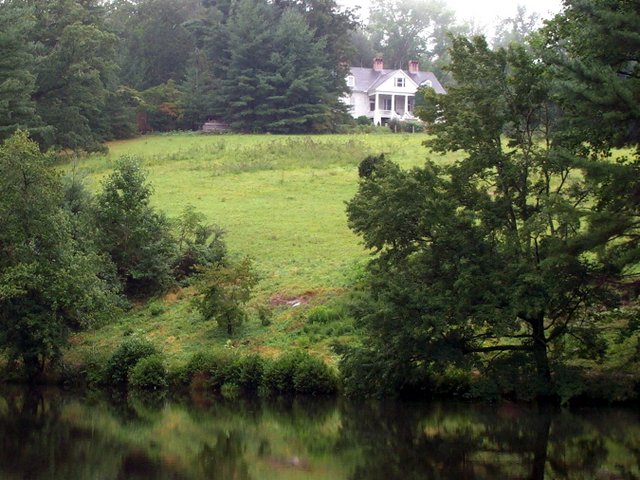