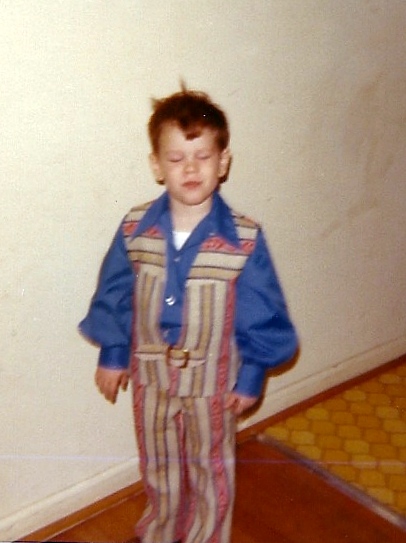 I feel a little bit sorry for people who weren't around in the late 1960s/early 1970s: they probably don't have any pictures of themselves in outfits like this. They probably never even got dressed quite this way at all.

Even at the age of four, which I believe I was in this picture, wasn't I remarkably hip? With my tousled hair and closed eyes, I look like I'd just been awakened from a deep sleep and put into these clothes, probably so I could go on as a last minute substitute for an ailing member of the 5th Dimension.

It was, after all, the dawning of the Age of Aquarius!

What? You don't think that an upcoming gig with the 5th Dimension is at least a semi-plausible rationale for my being dressed like this? Well, then, I don't know why I was wearing this outfit. There must be some reasonable explanation for it – but what it is, I don't know.

Maybe just the fact that it was 1971 is explanation enough.

Posted by Chris Burdett at 9:56 AM