This morning I went to Stone Mountain with the intention of going for a nice walk in the woods, but instead I ended up exploring some of the hidden relics of Stone Mountain's past. Along the way I was devoured by countless mosquitoes and nearly ripped apart by thorns, and I walked into about a dozen spider webs.

I started my visit with what I meant to be a quick stop by the beach pavilion area, adjacent to the golf clubhouse, just for a quick peek and maybe a walk along the edge of the lake, but I spied an interesting path through an open gate to the left of the beach area, so I decided to see where it went. I'm not sure if I was supposed to go there or not, but no sign told me not to, so I did.

What I found first were the concrete and steel supports for the park's long-defunct water slide: 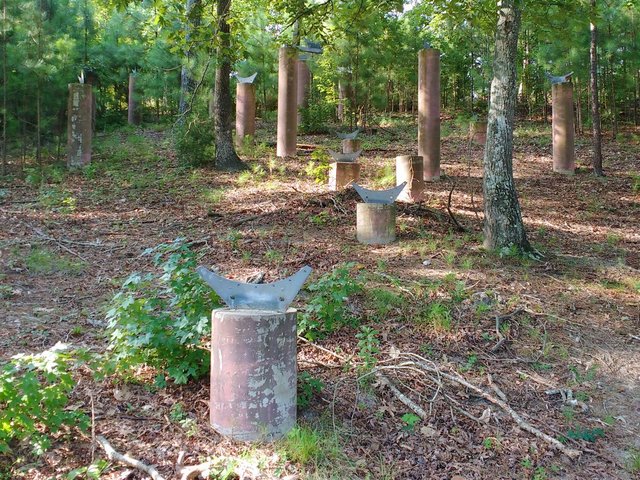 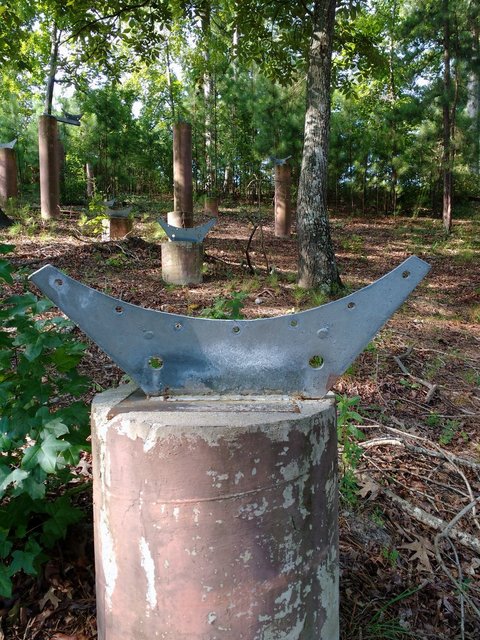 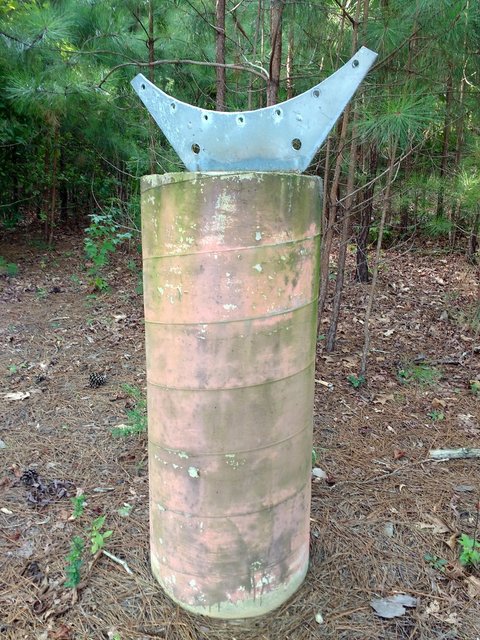 According to the Stone Mountain Park Web site's History page, the water slide was added in 1977. I vaguely remember going there with Mom and various aunts and cousins (I'm not even sure which ones) one summer day around that time, when I was ten years old or so, but I don't think we visited the water slide more than once or twice. The Stone Mountain Web site doesn't say when the water slide was removed, but I think it was sometime in the 1980s; I suspect these supports have stood there holding up nothing for more than three decades now.

Venturing a little further into the woods, I found a water fountain that must have once hydrated water slide riders, but which weeds and thorns and fallen branches have now made inaccessible: 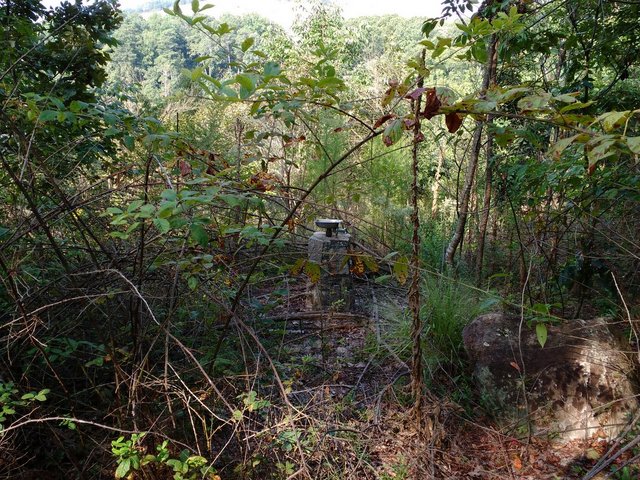 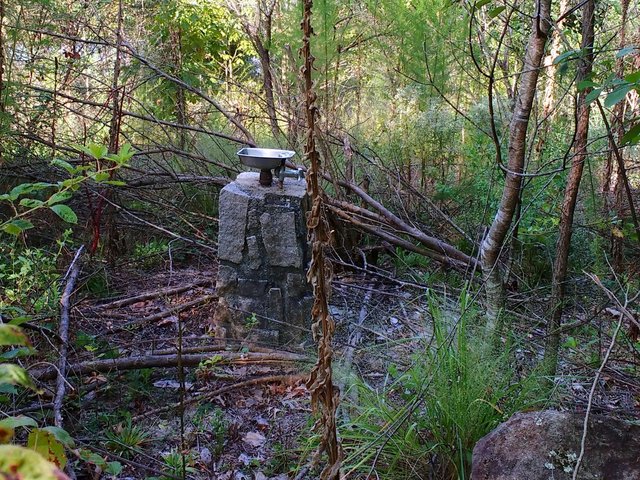 I'm sure its water supply was cut off years ago. The next water fountain, though, just a little bit further into the woods, was quite easy to get to: 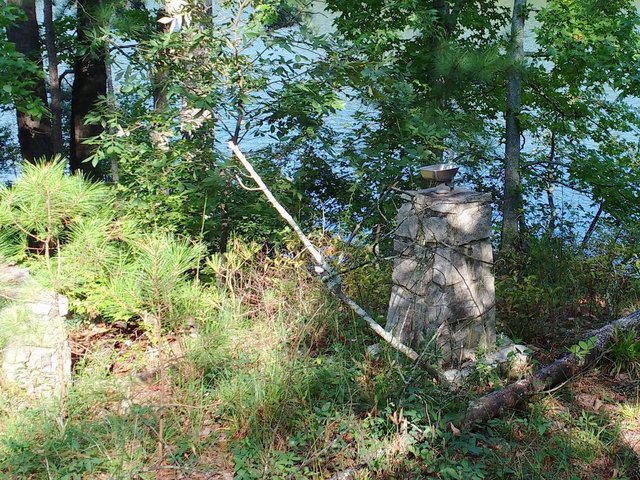 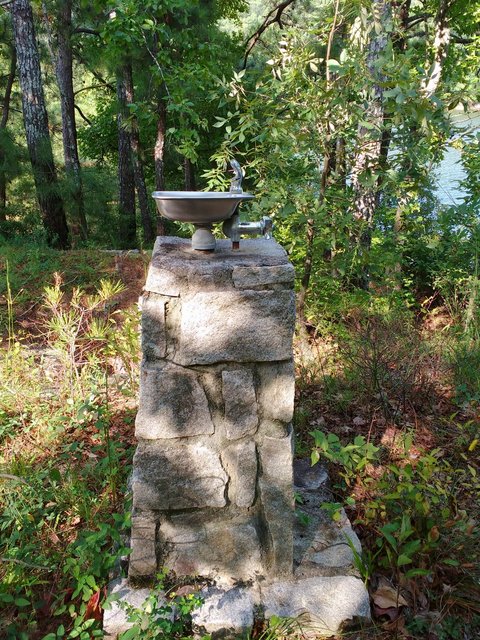 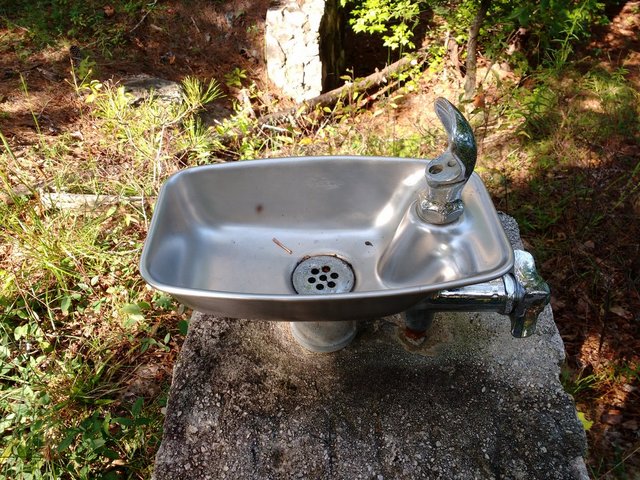 I did try it, and no, it doesn't work, but based on its appearance, I half expected it to. It's probably been years, decades, even, since anyone took a sip from it, but it looks like you could use it today.

Just a minute or two later I found the old beach: 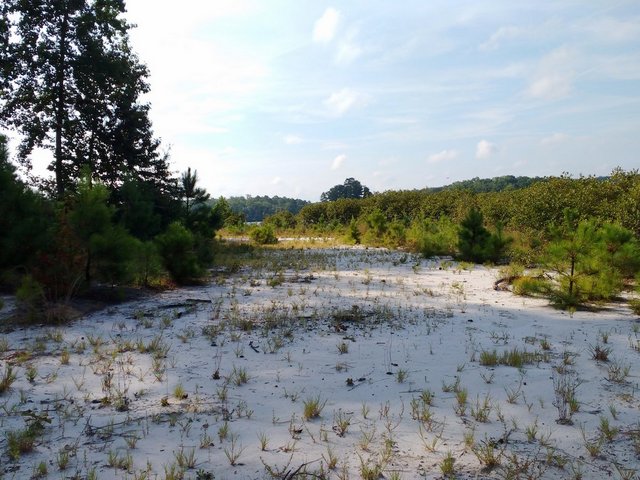 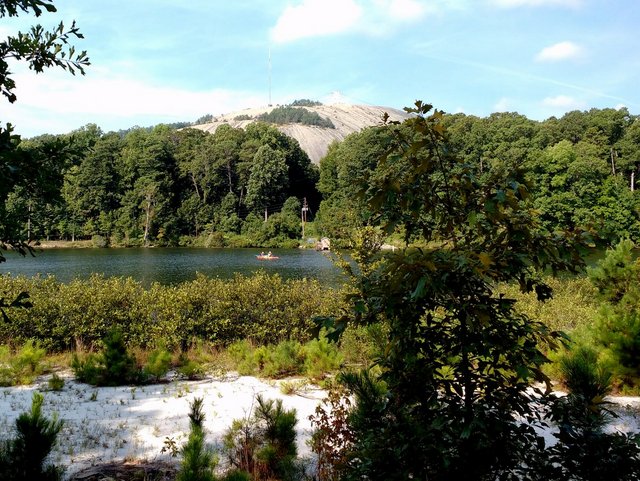 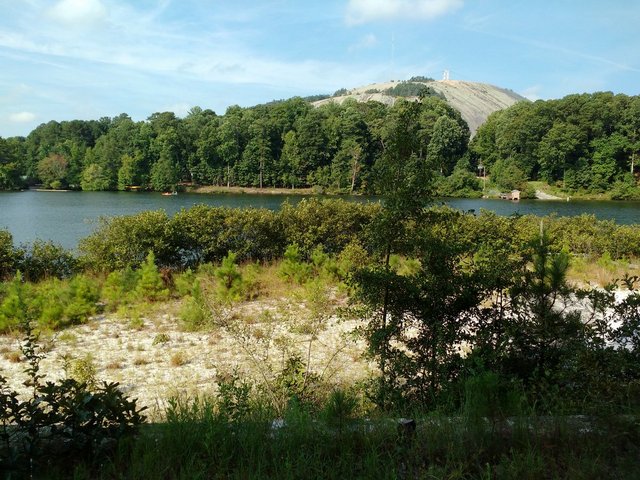 There's still, as you can see, a lot of sand, but also now a lot of weeds and trees. There are still hundreds of feet of retaining walls keeping what used to be beach separate from what is still woods, and the chain-link fence below (hard to see in this picture, I know) looks much less time-worn than I would have expected: 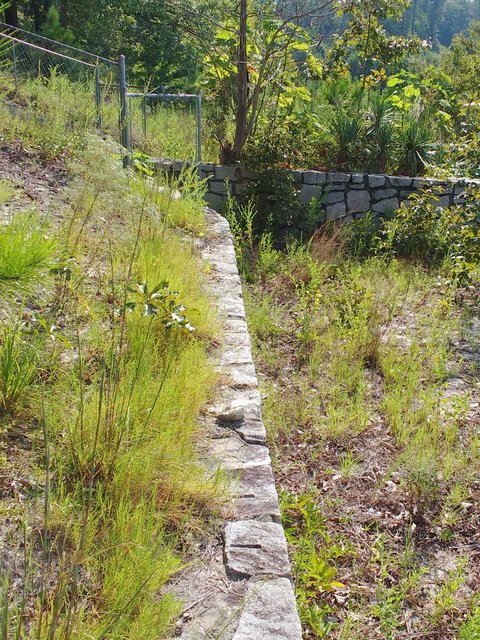 I'm not sure exactly what this was all about; it looks like a decorative raised garden, and perhaps it was, there to make your walk down to the beach more pleasant: 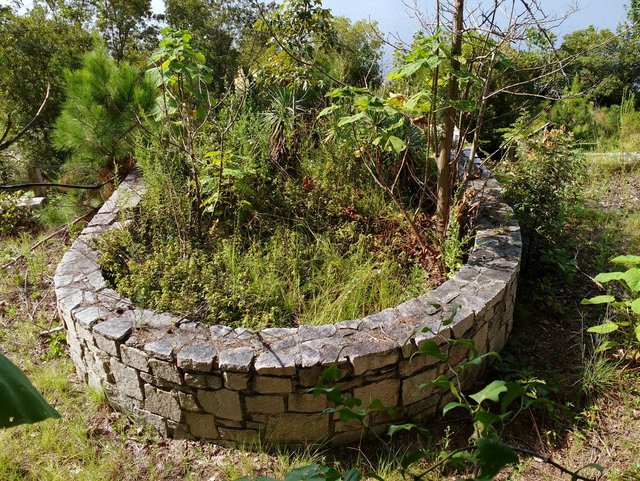 On the other side, the lifeguard stand still stands, though no lifeguard has been on duty for years, and swimming in the lake is now expressly forbidden: 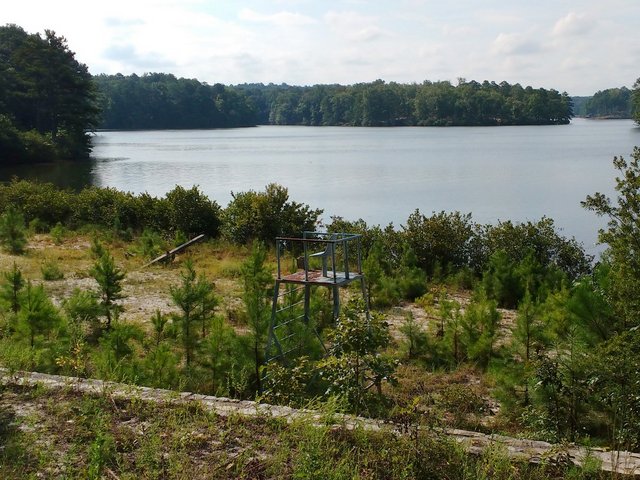 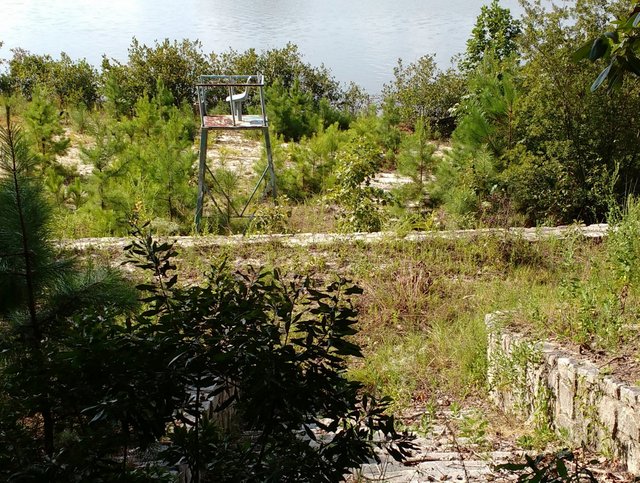 Granite steps still lead down to the beach, or what used to be a beach: 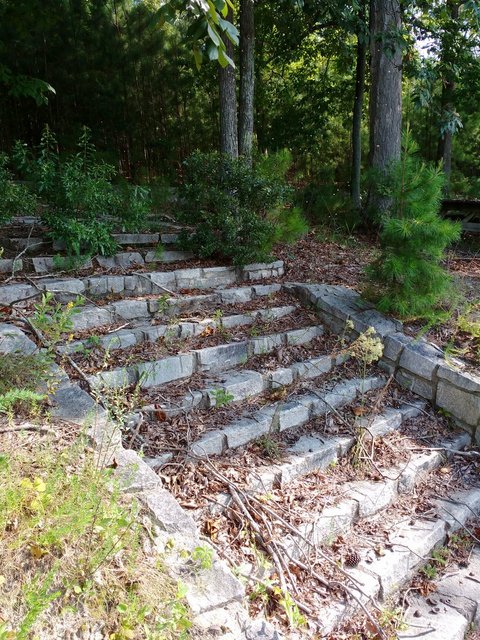 Another set of stairs, this one with handrails, is now all but impassable: 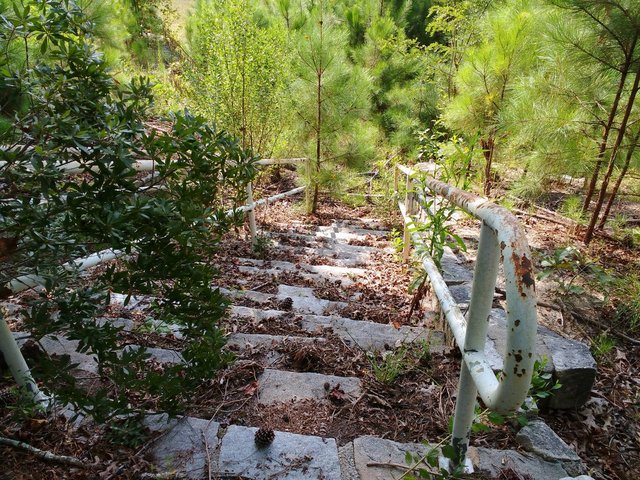 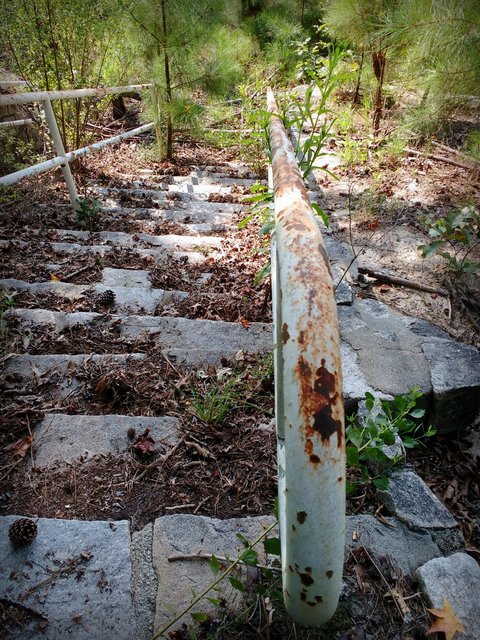 Twenty feet up a tree hangs an ancient speaker, its wire no longer connected to anything: 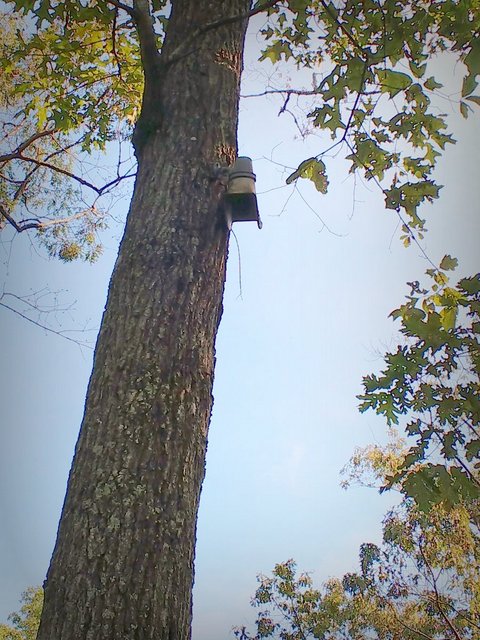 I saw several picnic tables sitting unused in the woods, none of them terribly inviting, but also not as worn and rotting as I would expect: 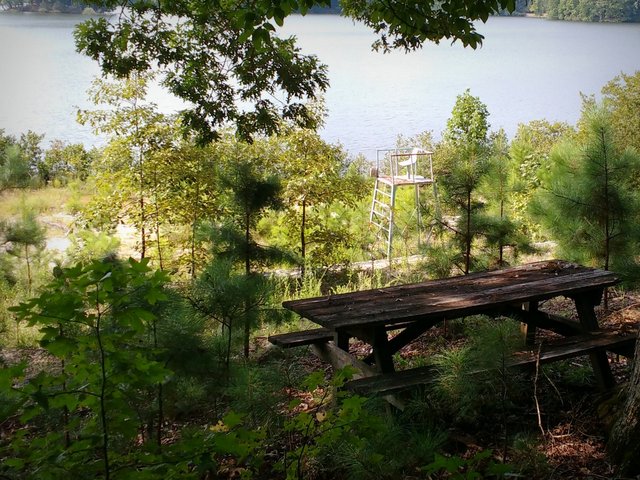 By this point, at least an hour into this tour, I had had enough of the mosquitoes and thorns and spider webs, so, despite my curiosity about what I would have discovered had I kept going, I turned around and trudged back to the car, and from there drove myself home to the comfort of air conditioning, my "WKRP in Cincinnati" DVDs, and chicken nuggets and Jasmine rice.

Later I looked at a map, and realized that what I would have discovered had I kept going was the edge of the campground; I had almost reached it.
Posted by Chris Burdett at 11:27 PM

Would this be the filmimg location for the song Real Love by Pia Zadora in Voyage of the Rock Aliens? (it's on YouTube)

Wow, that was pretty adventurous of you. But thank you, your spirit to explore answered some real questions. You were very brave. Thank you

When did it close?

Interesting... it looks like they were going to revive the waterparl at one time. It fell through.
https://counsilmanhunsaker.com/projects/stone-mountain-park-big-rock-waterpark/