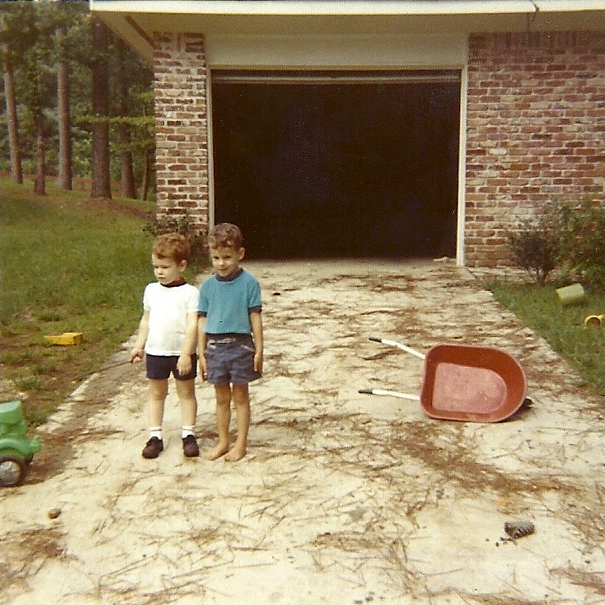 It was great being a kid fifty years ago, especially if you had a best friend like Darren to eat Cheerios and get strong with.

This picture shows me and Darren on the driveway of the house I lived in then in Clarkston. (I'm the one on the left, wearing shoes and socks.) If there's a story about that overturned kid-sized wheelbarrow beside us, I don't know what it is; I have no memory of that wheelbarrow. Or of the green plastic ridey-toy visible on the left side of the picture.

I don't remember those things, but this is one of the things I do remember from back then:

Probably around the time this picture was taken, about 1971 or 1972, Cheerios (the breakfast cereal) was running a TV commercial intended to convince kids like me and Darren that eating Cheerios would give you energy and make you strong. It worked. The commercial worked, I mean; I doubt the cereal actually gave you energy and made you strong, at least not nearly as dramatically as the commercial showed it doing to the run-down stick figure character, but Darren and I sure believed it did.

One Saturday afternoon we confirmed this belief by first trying to lift the sofa (whether in my house or Darren's, I don't remember). We couldn't do it – look at us in the picture; we were scrawny little kids! But then we ate a couple of handfuls of Cheerios (whether from my kitchen or Darren's, I don't remember), and then, Shazam!, we could lift the sofa! Cheerios made us strong, just like in the commercial!

The sofa probably wasn't really that heavy to start with, and it took both of us to lift it anyway, but we were convinced that the Cheerios had given us strength we hadn't had before. We didn't talk about whether we had been giving it our all on the pre-Cheerios lift attempt. (I suspect we hadn't, but admitting that–even discussing it–would have been heresy.)

I have no idea where Darren is today; after my family moved to Maryland, not too long after this picture was taken, Darren and I stopped being friends. We didn't have a falling out or anything – five-year-old kids don't – we just lived several hundred miles apart, which made it hard to get together and play, you know? And way back then we didn't have e-mail or texting or social media, so when somebody moved away, they were just gone. I wonder if that happens to kids these days: do they lose touch with people when they move, or if you know someone, does technology make that forever? In any case, I would like to know what became of Darren, and I'd love to be able to ask him if he remembers the Cheerios event–and if he remembers it the same way I do.

Posted by Chris Burdett at 3:09 PM