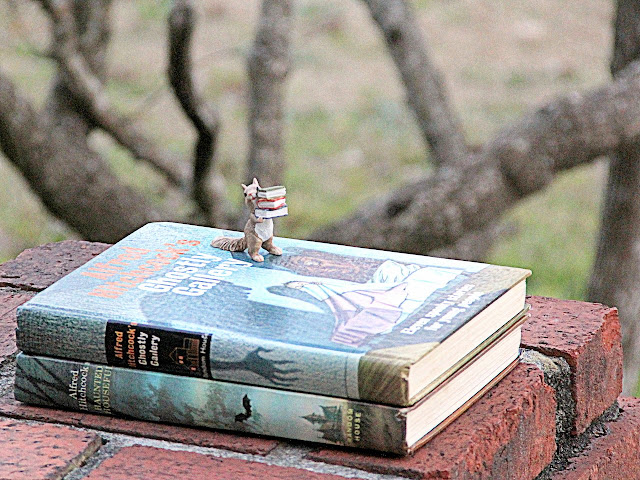 Alfred Hitchcock's Ghostly Gallery and Alfred Hitchcock's Haunted Houseful (and several others, including Sinister Spies, Daring Detectives, and Monster Museum--all with Alfred Hitchcock's before the title proper) weren't novels, they were short story collections, and included stories by many of the greats of the mystery and horror fields, such as Arthur Conan Doyle, H.G. Wells, H.P. Lovecraft, Lord Dunsany, Algernon Blackwood, Theodore Sturgeon, Ray Bradbury, Manly Wade Wellman, and many others. As I've already said, many of them were edited by Robert Arthur ("The editor [presumably a reference to Hitchcock] gratefully acknowledges the invaluable assistance of Robert Arthur in the preparation of this volume" says Alfred Hitchcock's Ghostly Gallery at the beginning of the copyright section, though Alfred Hitchcock's Haunted Houseful acknowledges Muriel Fuller), and Arthur often included a story of his own in the Table of Contents--and his stories were very good; Random House also published an excellent collections of Arthur's stories(Mystery and More Mystery, which has no mention of Alfred Hitchcock on it, but is otherwise much like the above mentioned anthologies).

These are really great books, and I'm glad I had them when I was a kid--though, honestly, the cover (actually more the back cover than the front) of Alfred Hitchcock's Ghostly Gallery (which I got as a birthday or Christmas present when I was about eight; I got the whole book as a present, I mean, not just the cover) scared the bejeebers out of me when I was young. Many of the stories are great, but so are the illustrations.

Posted by Chris Burdett at 6:24 PM