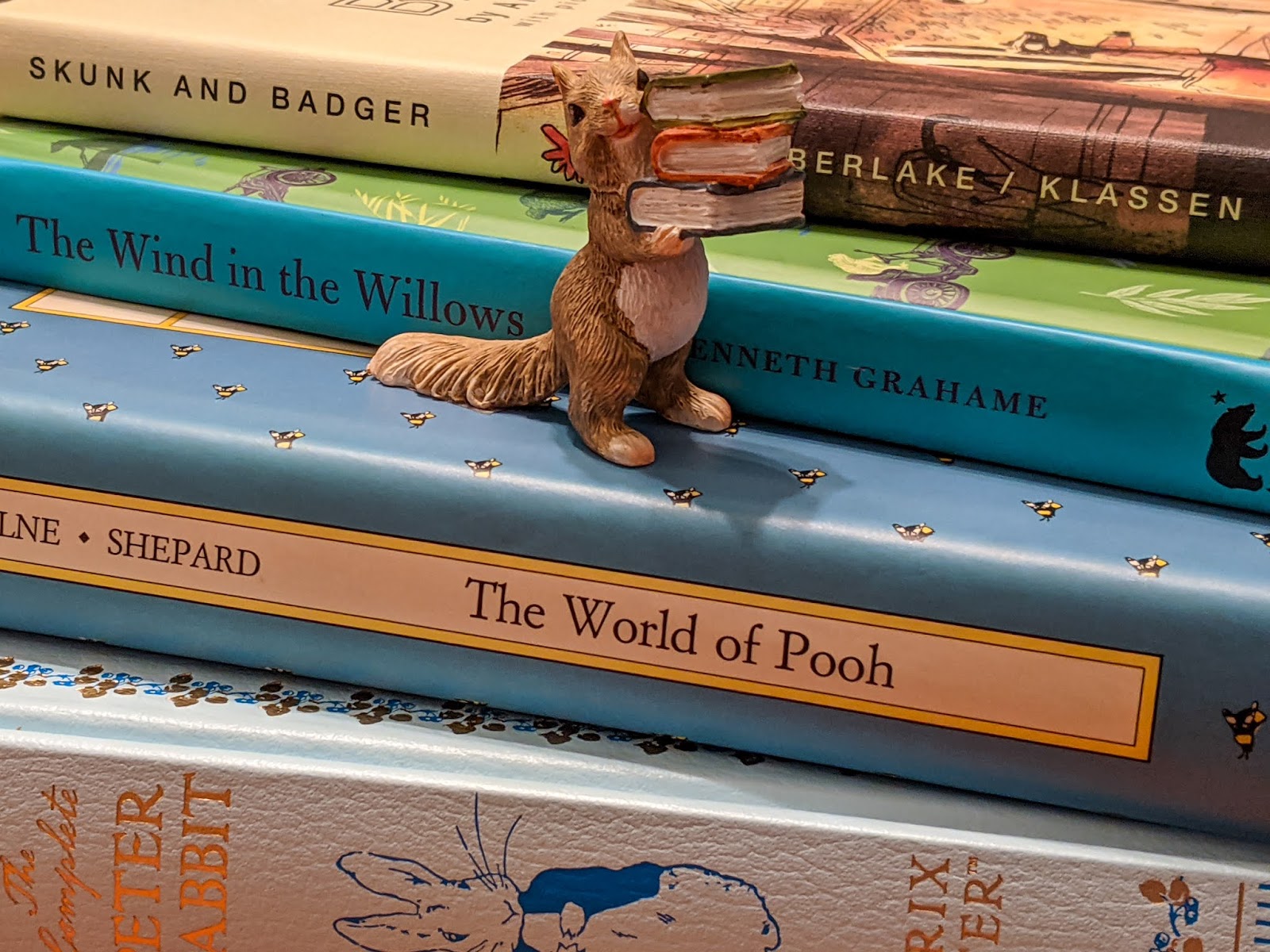 I love animal stories—the children's literature kind—so I'm going to write a little bit about them.

Children's picture books are filled with animal stories; I suspect that talking, clothes-wearing furry creatures outnumber talking, clothes-wearing human beings in the picture books at most libraries and bookstores. Many of these books are great, but what I'm thinking about here are longer, more prose-heavy books—chapter books and novels. Among those, there are at least three kinds of animal stories (and probably a lot more than that):

1. Completely realistic (and sometimes even true) stories about people and animals, where the people behave like people and the animals behave like animals: The Black Stallion, My Friend Flicka, Old Yeller, Sounder, Gentle Ben, and that one about the racoon, the name of which I can't remember now, and many more. The animals are essential to these stories, but it is really the people who are center stage.

2. Somewhat realistic but mostly fantastical stories about people and animals, where the people behave like people and the animals behave like animals, except for when people aren't around, at which time the animals behave like animals who are fully sentient and can speak English: Charlotte's Web is the best example of this, and also one of the most wonderful books ever written, and also the only example of this kind of book I can think of right now. In Charlotte's Web, the animals don't wear clothes or drive cars or hold down jobs, but they do, when the people aren't around, talk to each other and plot to save Wilbur's life. The sheep and the geese and the pigs and the rat and even the spider—especially the spider—all speak the same language, and remember too that Fern (the human little girl) can understand them, though her mother doesn't pay any attention when Fern tries to tell her about it. The people are essential to these stories (or at least to Charlotte's Web), but it is really the animals who are center stage.

(Charlotte's Web is a great book. If you haven't read it, go read it right now.)

3. Entirely fantastical stories in which people—human beings, that is—don't play an especially large part, and animals are mostly or completely anthropomorphized and talk to each other (even among very different species) and wear cloths and have jobs and houses and use dishes and teacups and cutlery and are all, apparently, for some reason about the same size. This is my favorite category, and the one into which perhaps my favorite novel, The Wind in the Willows, fits. I would also include A.A. Milne's Winnie-the-Pooh stories (published in Winnie-The-Pooh and The House At Pooh Corner) in this category; yes, I know, it's made clear in the first book that the stories of Pooh, Piglet, Owl, et al., are stories the Father is telling his Son about the Son's stuffed animals, but that frame isn't consistently applied, and in fact is pretty much abandoned in the second book. So mostly Pooh and his friends are anthropomorphic animals rather than stuffed ones, and Christopher Robin, while occasionally being called upon to Save the Day, is not the central character. The animals are very much center stage. The Wind in the Willows includes only a couple of human characters, who are minor characters; they are barely on the stage at all.

Last year, my favorite of the new books I read (admittedly a fairly short list) was a new category 3 animal story: Skunk and Badger by Amy Timberlake. I really loved this book. One reviewer described it as a sort of cross between "Frog and Toad" and "The Odd Couple," and that seems pretty fair, though I think there's just as much The Wind in the Willows as Frog and Toad Are Friends in Skunk and Badger.

Posted by Chris Burdett at 6:45 PM