Nearly Everything That Was Wonderful About My Youth

This picture, from one of our family vacations to Florida around (I'm guessing) 1978, illustrates nearly everything that was wonderful about my youth: 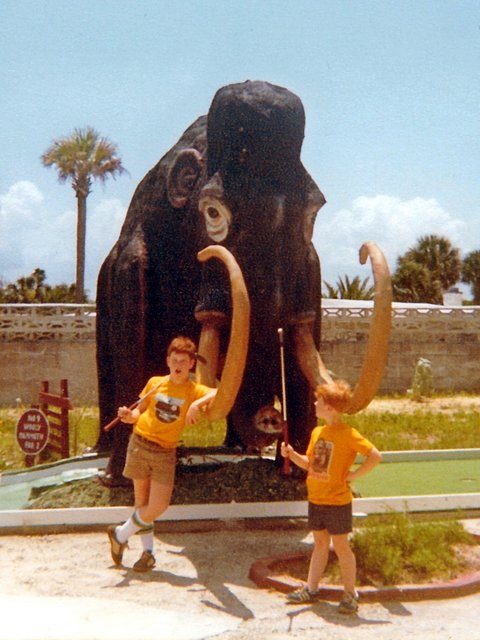 First of all, we're in Florida, and among my most treasured memories are those of our annual family vacations. And, as you can see, Jeff and I are playing miniature golf--you probably can't read it, but the oval sign at the left edge of the frame says, "No. 9  - Woolly Mammoth - Par 2." Was there, for a young boy in the 1970s, any place cooler than a miniature golf course with statues of dinosaurs and prehistoric creatures and monsters of various kinds? (The answer is No, no place cooler--though admittedly quite a few places equally cool; many of them also happened to be in Florida.)

If you look closely, you can see that Jeff and I are wearing Star Trek and Star Wars shirts. Jeff's shirt has a picture of Chewbacca on it; mine features the star ship Enterprise. There was nothing more wonderful back then, nothing more wonder-filled and pure, than the love of an eight or ten or twelve year old boy for Star Trek and Star Wars. (Equally wonderful, though, I will admit, was the obsession we had back then for the collection of Micronauts and Shogun warriors that we were amassing at home...but that's another story.)

Most important, though, is the fact that somebody took this picture. Somebody cared enough to preserve this moment on film so that more than forty years after the fact I can appreciate it. Somebody loved us enough to have bought us Star Trek and Star Wars shirts, enough to take us to Florida, enough to pay our admission to the miniature golf place.

And that is the most wonderful thing of all.

Posted by Chris Burdett at 8:00 AM