Day One: Driving to North Carolina

For the third year in a row, I'm taking advantage of Anna's October break to go on a short road trip and drive some of the Blue Ridge Parkway.

This morning, I taught my two Tuesday classes, went to the part-time faculty offices and printed some things to get ready for next week, and then hopped in my car and drove for many, many hours until I got to the place from which I am writing this, the Sleep Inn in Boone, NC. (I actually got here 40 minutes later than Google Maps told me I would; there was some overnight roadwork getting started on US 221, just about the only road that'll get you to this hotel--at least in the direction I was coming from, anyway--so I sat in a line of unmoving cars and trucks from 10:20 until 11:00, when traffic finally was allowed through and I was able to drive the last six miles here.)

I did make a few stops along the way, including one for lunch at a Wendy's in Royston, GA, and at the Barnes & Noble in Spartanburg, SC, to get the newly-published Best American Essays 2018 (it just came out today) and to grade some essays (while drinking chai tea and eating a cookie): 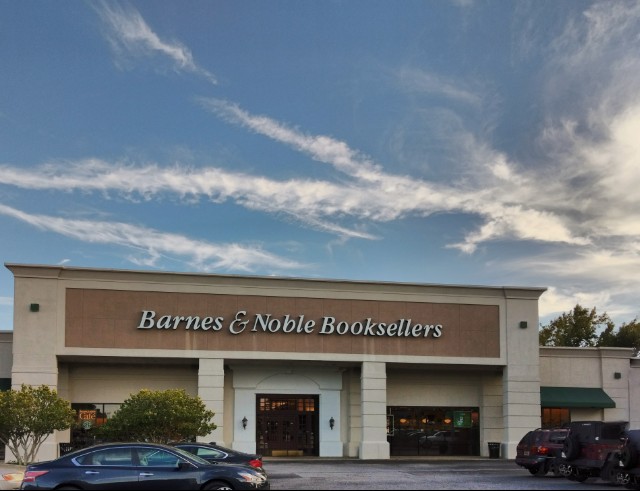 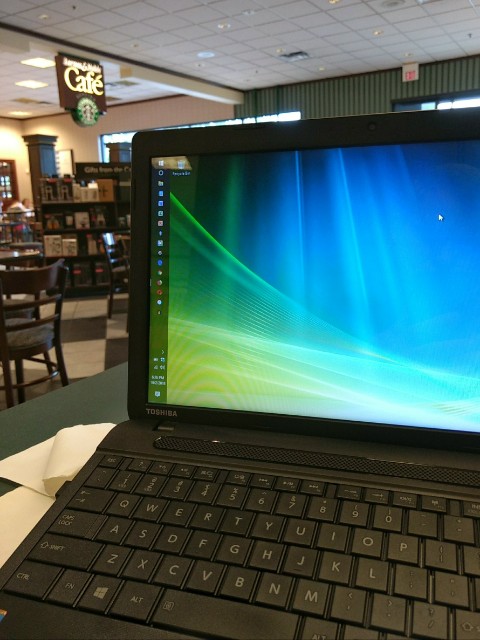 Tomorrow morning, I'll get up (hopefully not too early, because it's pretty late now), have some of the Free Continental Breakfast here at the hotel, and then get on the Blue Ridge Parkway!

After a breakfast of a sausage, egg, and cheese croissant, a Danish, and a lot of coffee, I checked out of the hotel and got on the Blue Ridge Parkway. I hadn't gone far before I stopped to visit a place I hadn't even been anticipating, the Moses Cone Manor: 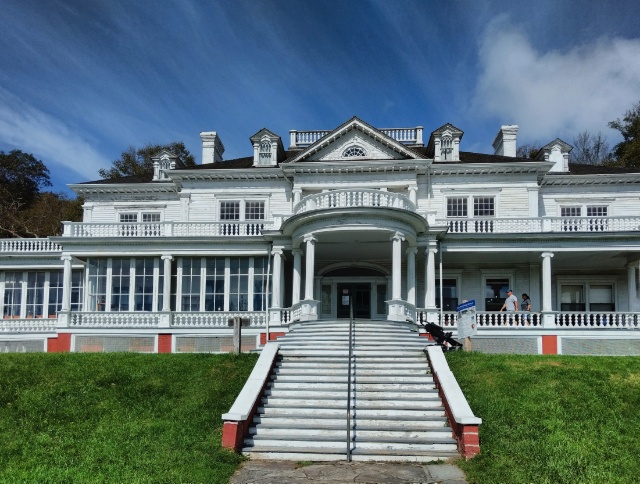 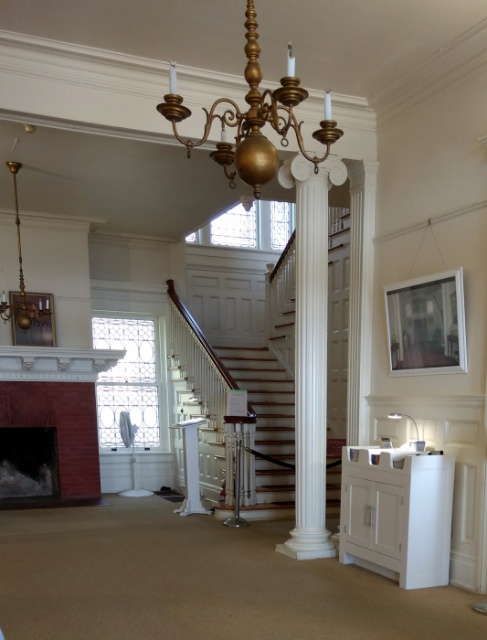 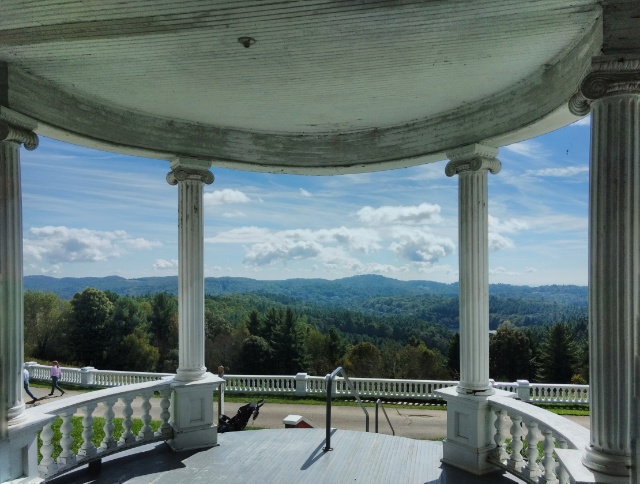 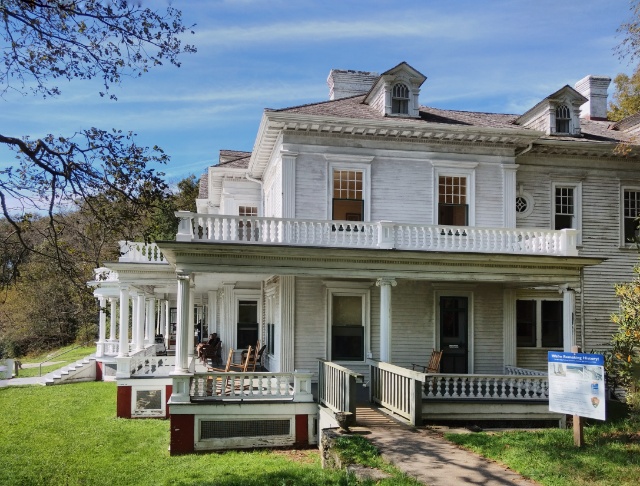 Quite a few other people were there visiting the manor with me, mostly retired couples and groups of senior citizens. There was one family with children younger than my own; except for them, I was the youngest person around (including the park rangers and the artist demonstrating his craft in the craft room).

I stayed there for about half an hour, seeing as much of the house as I could--to visit the second floor I would have had to hang around until the guided tour began at 1:30, a two-hour wait I wasn't up for--and then I headed back south on the Parkway.

At some point, I don't even remember exactly when, I stopped and texted this picture to Anna and Jessica: 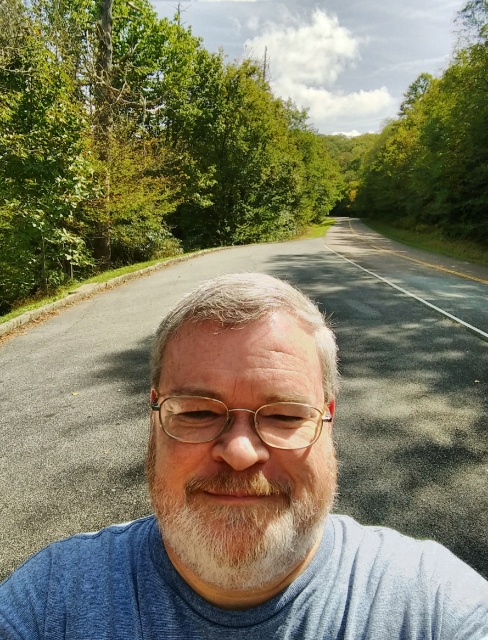 I stopped at a country store to look around for a while; I bought an old Nancy Drew book for Jessica and this for myself: 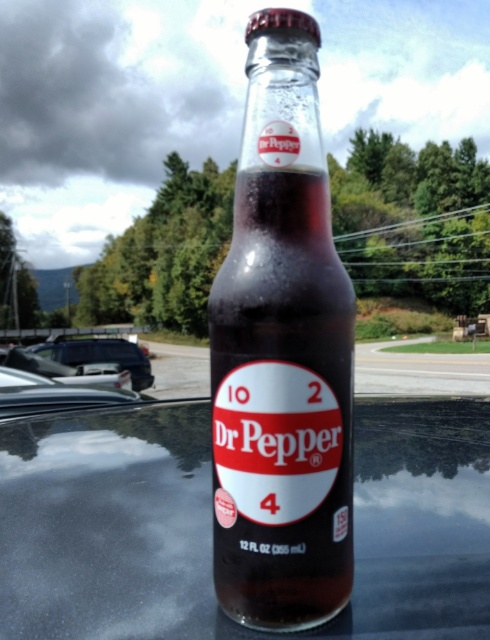 My next stop was the Linn Cove Viaduct, where I walked beside and under the elevated road for about half an hour before turning around to return to the car (and change my shirt--I got really sweaty): 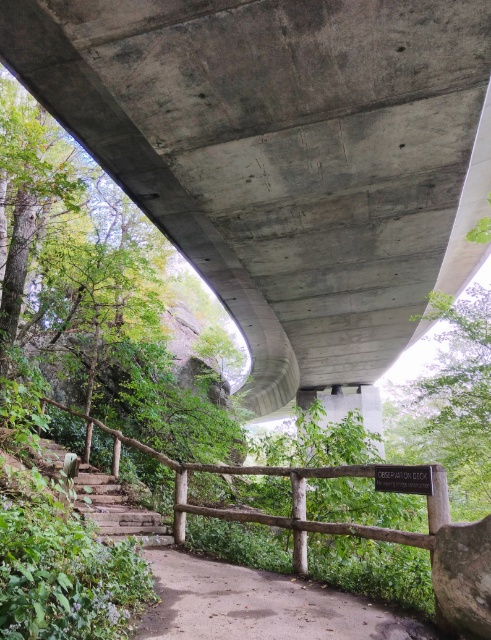 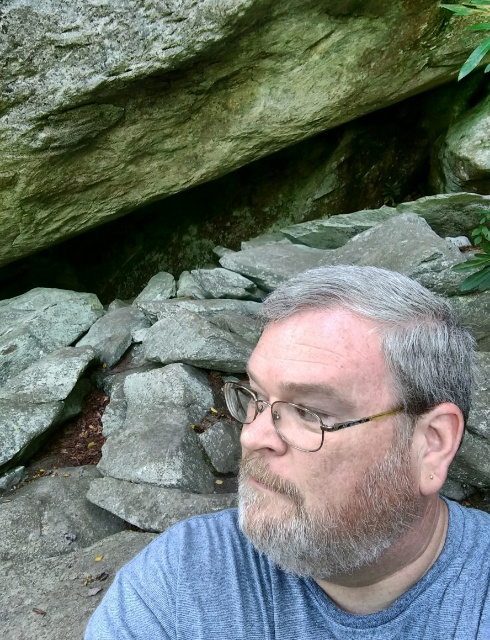 From there I went to Linville Caverns for a thirty-minute underground tour: 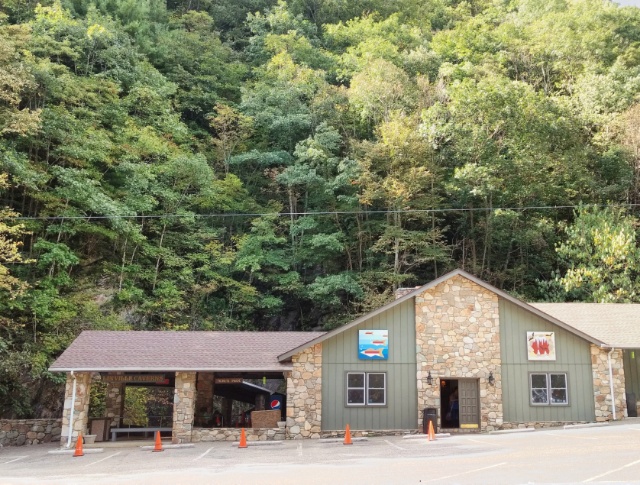 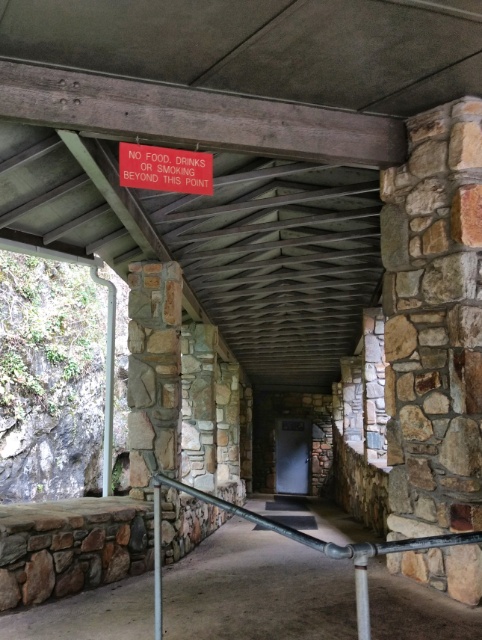 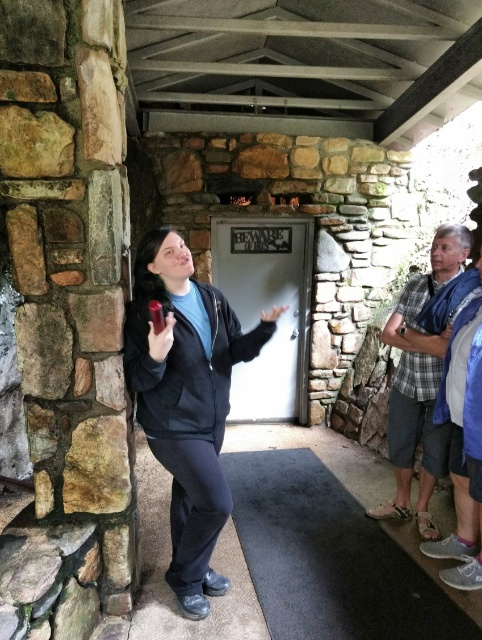 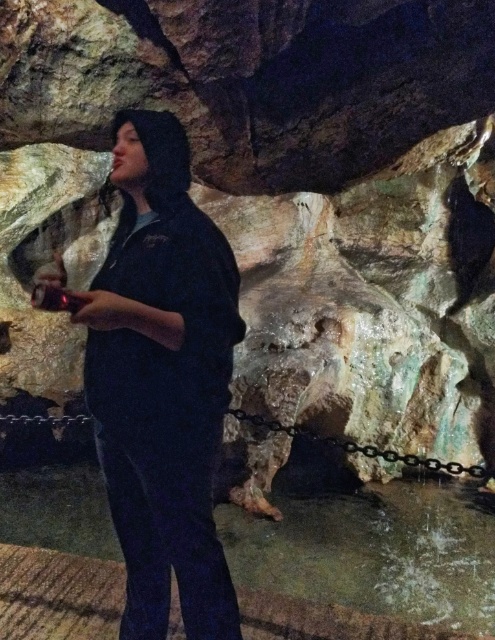 I enjoyed the tour; at 30 minutes, the length was just right, and the $9 price tag was quite reasonable. However, because of the recent rains (and the hurricane a few weeks ago), the ceiling and the walls and a whole host of stalactites were constantly dripping water on me; when I came out, it was almost as if I'd taken a shower with my clothes on.

This obviously isn't in the caverns, it's the bridge crossing the river to get to the Linville Caverns parking lot. I like the multi-colored shafts of sunlight arrowing down from the clouds: 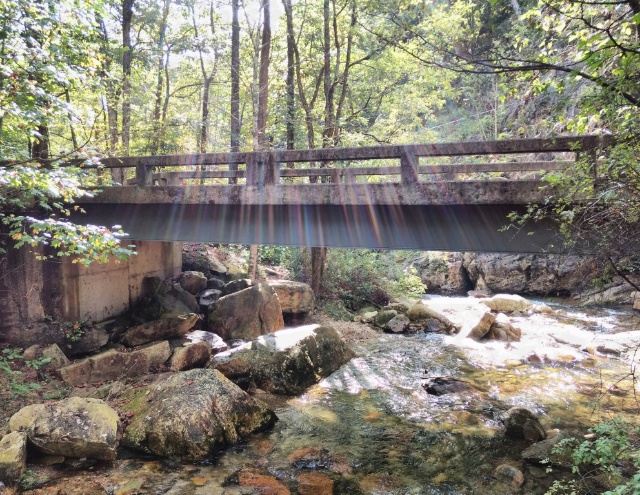 By this point I was ready to do some dedicated driving, so I drove south on the Parkway for about three hours, stopping frequently to take pictures, such as this spot--I wish I had written down exactly where it was--where the crepuscular rays were, for a time at least, very pronounced and quite beautiful: 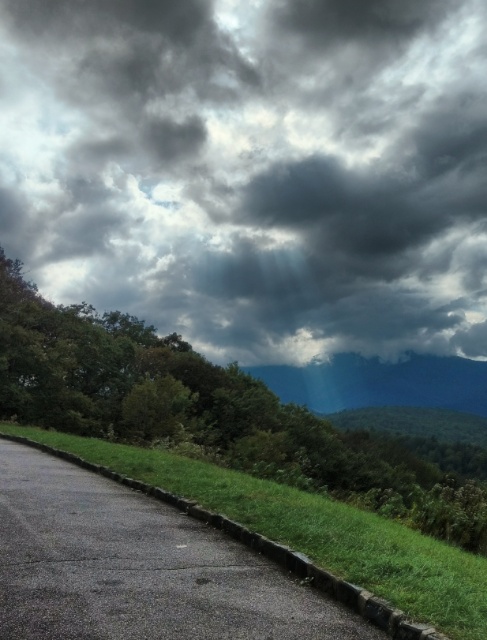 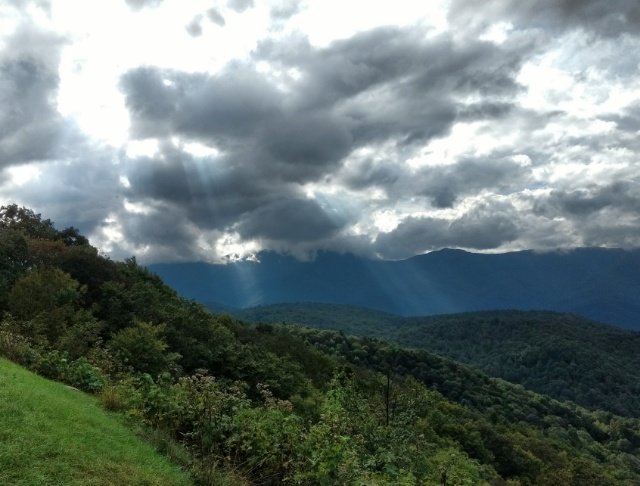 I made it to Asheville around 6:45, and decided to stay there for the night so I could go to the Folk Art Center in the morning. I got a room at an Econolodge (where, I realized after I arrived, I had stayed before a couple of years ago), picked up some dinner from McDonald's, and settled in for the night.

Here are three views from Asheville as seen through my hotel room window, one taken Wednesday night and the others Thursday morning: 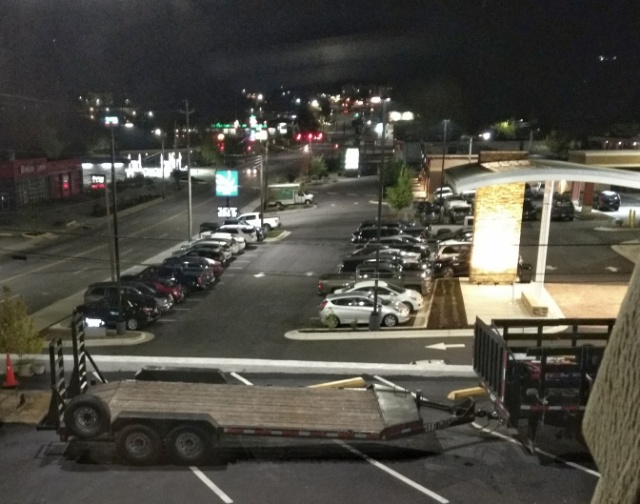 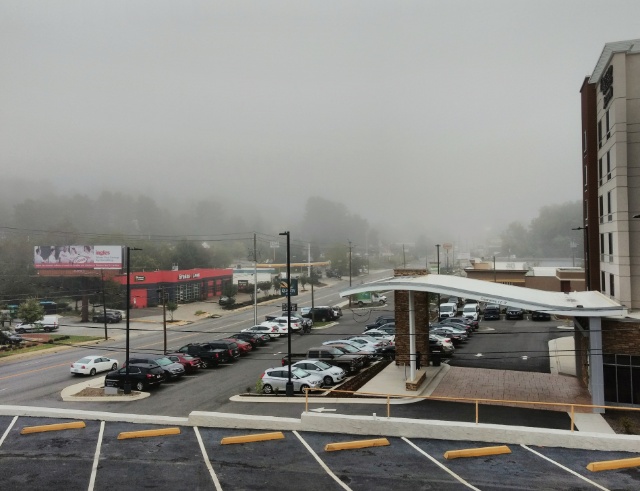 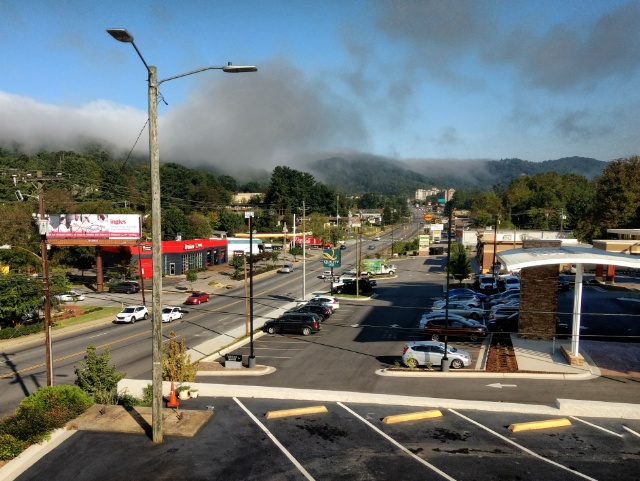 Here are my two favorite parts of any hotel lobby, the brochure rack and the breakfast area: 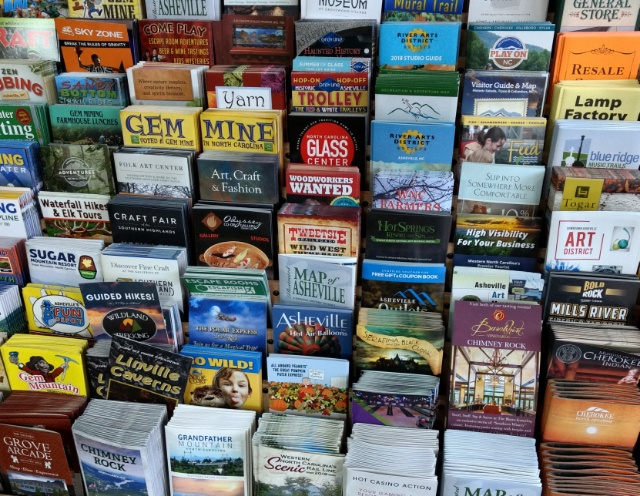 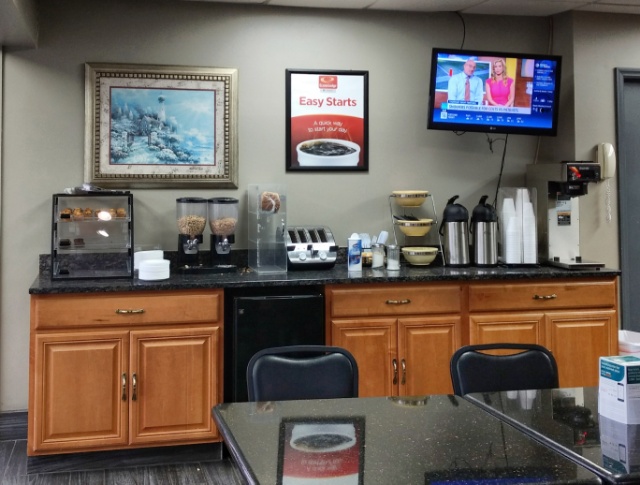 (The breakfast here was rather meager, but the six--okay, eight--little chocolate-covered donuts and bowl of Frosted Flakes were okay, considering that it was an ECONO-lodge.)

I started out the day at the Folk Art Center, which is one of my favorite places in the world: 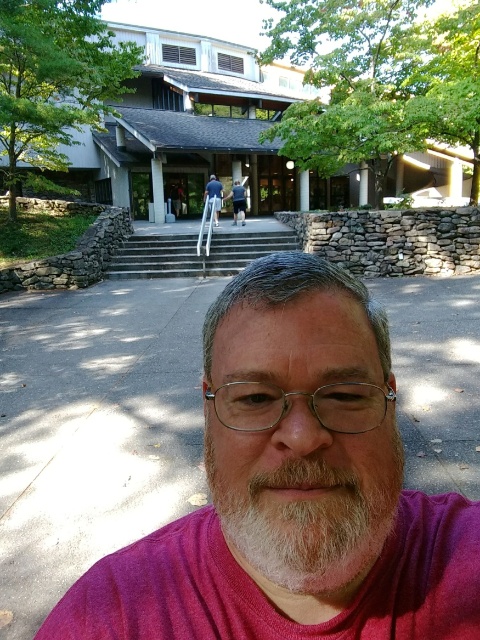 Photography is not allowed in the Folk Art Center, but I snuck this picture through an outside window to text to Jessica: 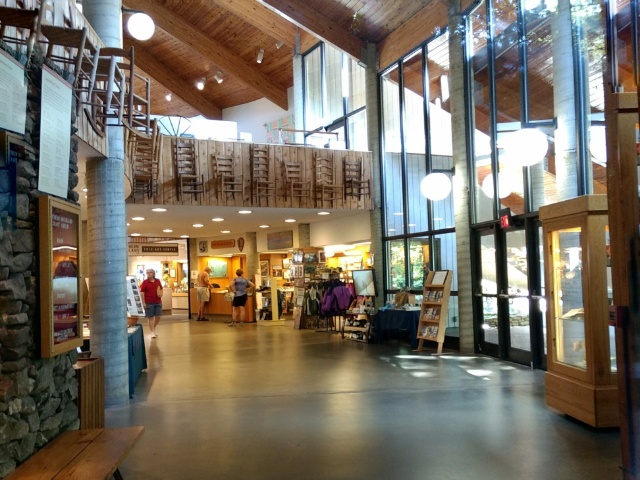 Her reply was "Chairs on the walls," which, as you can see, there are.

I spent an hour there, and bought a commemorative spoon for Jessica and a book for Elyse (C is for Cardinal). When I left, it felt a little like my trip was over--even though I was still 170 miles from home.

I had some lunch at a Chinese buffet in Asheville (where the sesame chicken was quite mediocre), and then meandered back to Grayson, taking 441 for much of the drive, and got back home at 8:20pm.  According to my Hyundai's trip meter, I'd driven 611 miles since pulling out of the Gwinnett Tech parking lot Tuesday afternoon, and that was far enough. After most of three days on the road by myself, I was glad to be back with my family.
Posted by Chris Burdett at 11:30 PM