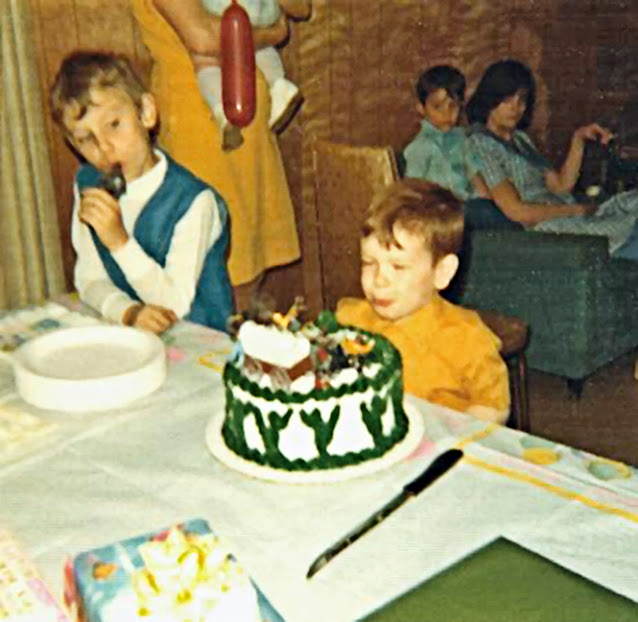 Back in mid-November I wrote a musing looking at a picture from my fifth birthday party, and I wrote (among many other things) this:

...the cake was decorated with a plastic horse and cowboy. Sometime after this party, later the same day or the next day, perhaps, I took them out to play with in the neighborhood, and I left them on the curb a street or two away when Mom called me home for supper. I went out to play with them some more, later that day or maybe the next day, I'm not sure, and I was incredulous that they weren't still there on the curb where I'd left them. Someone stole my horse and cowboy from me!

Well, it turns out that the cake I was remembering was from the year before, when I turned four, as shown in this picture--if you look carefully you can see the white-topped plastic wagon I remember playing with atop the cake, and you can kinda-sorta tell there are horses there too. (The green icing on the side of the cake was supposed to be cactuses (cacti?), I think, but I didn't play with those, of course, I just ate them.) It was these decorations, from my fourth birthday party, that I remember being stolen.

Much easier to distinguish in this picture is my cousin Scott, right beside me, with the business end of a cap gun in his mouth. (I'm not actually sure which end of a gun is the "business end," I just really wanted to use that phrase.) Behind him is my aunt Danelle, her head cut off in this picture, holding my brother Jeff and, it appears, a red balloon; Jeff would have been only a little more than a year old here. (You can't tell it's either Danelle or Jeff in this picture, but I have other pictures from this birthday party in which you can.) Also shown in this picture, sitting down and apparently smoking, is a woman whose name I don't remember; she lived in our neighborhood, I think, and was a friend of Mom's. The little boy beside her is her son, whose name I think was Anthony.

This whole affair--my fourth birthday party, I mean--took place, like my fifth birthday party the following year, in the finished basement of our house in Clarkston. I'm sorry to say that I don't really remember this party, except for the sad business of the stolen cake decorations. I do, however, remember the basement well. I have no memory of my bedroom in that house--I was five when we moved away from it, after all--but I do remember the basement clearly, and with great fondness. At least a couple other pictures I have written about here show this basement, and my attraction to basements probably started here. (I also have a fascination with attics, but that isn’t necessarily connected with this basement; I blame by C.S. Lewis and The Magician's Nephew for starting the interest in attics.)

Posted by Chris Burdett at 7:59 PM