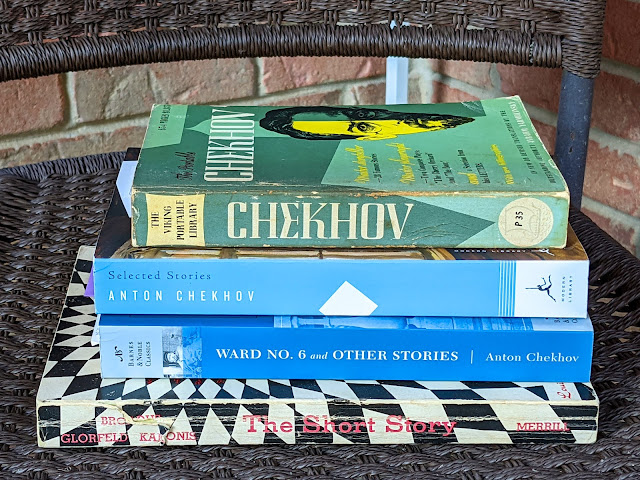 Up until I was nineteen or twenty, if you had said "Chekhov" to me, I would have immediately thought of Ensign Pavel Chekov, the navigator of the U.S.S. Enterprise, played by Walter Koenig on the original "Star Trek" series and in a number of theatrically-released movies. He was my default Chekov. (Didn't know there was such a thing, did you?)

Sometime around 1986, though, my default Chekhov changed (both in the person it referred to and in the number of H's in the spelling, as you can see.) I was very interested in short stories then (still am, though back then I actually wrote them; now I don't), and I was reading a book I'd bought used somewhere or other called The Short Story. (It's actually an old college textbook for a literature class in short stories; it was published in 1967, the year I was born.) One night I read a Chekhov story in that book called "The Lament," about Iona, the cab driver in late-nineteenth century Russia, who is so overcome with grief at the loss of his son, and so unable to express his grief to any of the uncaring people he encounters through the course of the story, that at the end of the story he tells all his problems to the little horse who pulls his cab.

It's a stunning little story--only about four pages long, probably no more than 2,000 words, but heartbreaking. That's when my default Chekhov switched from the fictional twenty-second century starship navigator to the real nineteenth century Russian author.

I didn't actually read that much more Chekhov then, though, although I probably did sometimes tell people he was one of my favorite writers. Mostly I was reading the works of people who were American and still living and writing (Raymond Carver, who was still alive and working then, Bobbie Ann Mason, David Leavitt, Peter Cameron, Lorrie Moore, and a whole host of others, all of whom are still working as I write this) and dreaming about taking my place among them (which I never did--but that's okay; I gradually came to recognize that I didn't necessarily belong among them).

These days I do read a good deal more Chekhov, and I love his stories. But what I also love is the alienness of the people and places he describes--there's something immediately intriguing to me about being told that a character's name is Dmitri Illyich, and that he is sleeping on a haystack near an old barn in Vladivostok. Those exotic names (or exotic-sounding, to my American ear) get me every time.

Posted by Chris Burdett at 9:10 PM