Throwback Thursday: Scott and Me, 1982 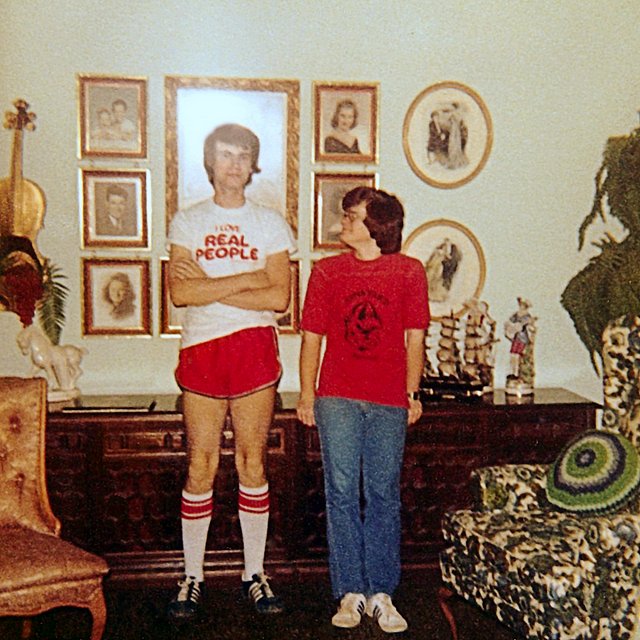 This picture of my cousin Scott and me was taken in the den of my grandmother's house in Tucker in 1981 or 1982. Scott and I both went to Berkmar High School by then; I'm pretty sure this was taken when I was in ninth grade and he was in eleventh. We were still close at that point: I saw Scott every day at school, and we got together most weekends either at my house to play Wizardry on our Apple II or his house to "jam" (he played drums and I played guitar; I was naïve enough back then to think of what we did with our instruments in his garage as "jamming," but "making an unholy noise" is probably more accurate). This was some months, maybe even a whole year, before we formed our short-lived high school band, Voyager, with Roy Smith, whom we met in Coach Wilson's World History class. Roy played drums, I played guitar, and Scott played bass and keyboards and sang (but, because we didn't have a P.A. system, you couldn't actually hear him singing). Every song we played (except the few that we wrote) Scott or my guitar teacher Desi showed me how to play. I didn't realize this at the time, but I had—have—terrible ears and very little musical ability. If somebody showed me where to put my fingers I did okay, but my ability never really rose above that basic level of knowing where my fingers go. It still hasn't, and though I still noodle around on guitar every once in a while, I still can't really play anything that Scott or Desi didn't teach me.

Scott's shirt says "I Love Real People." He got it (if I remember correctly) at a taping of the TV show "Real People" when his family made an epic drive across the whole country, from Georgia to California, a few months earlier. My shirt says "Junkyard Dog" and features a drawing of a bulldog. I didn't get it at a taping of anything; it probably came from Treasure Island. Or maybe Richway. In any case, whether this shirt really had anything to do with the University of Georgia—a possible connection about which I was completely clueless at the time—I don't know, but people seeing me wearing it often assumed it did. They also incorrectly assumed I knew more (which is to say, anything) and cared more (which is to say, at all) about UGA and college football than I actually did.

Behind us on the wall of Granny's den were the family pictures that I think of as having always been there. The topmost picture on the left is my brother Jeff and me. That picture was taken just after my mother had to get my hair trimmed down to a crew cut after my cousin Catherine tried to give me a haircut in 1971, an incident I heard about all the time when I was growing up. As you can see, my hair eventually grew out.

Posted by Chris Burdett at 3:42 PM