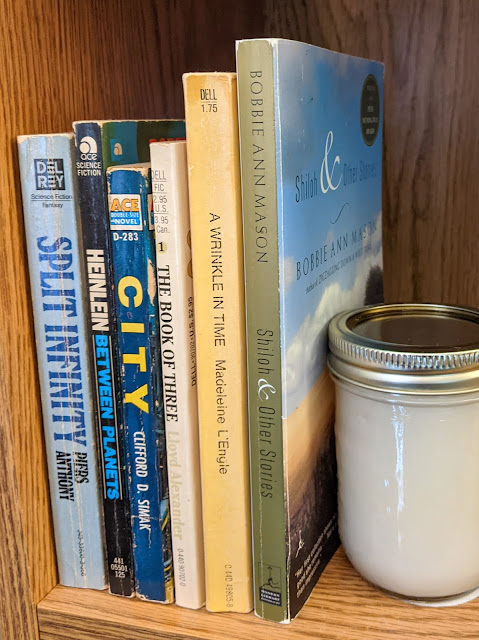 I've been thinking about books and reading a lot lately. I mean, even more than usual.

The writer whose work I've read the most of—I admit this with a little bit of embarrassment—is Piers Anthony. It's been nearly thirty years since I read anything by him, but between 1981 and 1993 I read twenty-seven of his novels. Twenty-seven! There's no other writer I've read that much of, even if it has been decades since I read him. I loved his books when I was a teenager, and I had actually more than twenty-seven of them on my shelf (obviously there were a few I never actually read); for a while, I called him my favorite writer.

As I said, there are no other authors whose work I've read that much of, but there are a few writers from whom I've read around a dozen books, and none of those are embarrassing to me: Robert A. Heinlein, Clifford D. Simak (who I also considered my favorite writer for a while when I was teenager), Madeleine L'Engle (also my favorite writer for a while; I really loved her work), Lloyd Alexander, James P. Blaylock.

And I've read more than two hundred of Ray Bradbury's short stories, but that's about the equivalent of ten Piers Anthony novels, and I haven't ready any of Bradbury's true novels (he didn't actually write that many—The Martian Chronicles and Dandelion Wine, for example, are both related groups of short stories published under one title—and no, I haven't read Fahrenheit 451). I've read 70 or 80 of Gene Wolfe's short stories but none of his novels, and 60 or 70 of Isaac Bashevis Singer's short stories (I might even say that for the last couple of years he's been my favorite writer), but also none of his novels.

When I was nineteen my favorite writer was Bobbie Ann Mason, but that was solely on the strength of one short story collection (Shiloh and Other Stories, still, I think, a great book) and her first novel (In Country, which had just come out when I started reading her). I also really loved Lorrie Moore, but that too was based only on a couple of books. I haven't read anything by either of them since the early 1990s, though both are still writing.

These days I spend a lot more time thinking about reading than actually reading. I don't read that many novels these days (and when I do, there's a good chance I'm just reading The Wind in the Willows again), but I read lots of short stories—it's my favorite literary form, and last year I read over 200 of them, including all of Flannery O'Connor's stories, most of John Cheever's, and a number by Gabriel Garcia Marquez (many of which I wasn't crazy about, but "A Very Old Man with Enormous Wings" is a remarkable story), Eudora Welty, William Faulkner, and other "literary" writers. I also read a number fantasy, science fiction, horror, and mystery stories from various magazines and "Year's Best" collections (i.e., The Year's Best Science Fiction & Fantasy 2019, Best New Horror 23, etc.). And I re-read Joe Hill's collection 20th Century Ghosts, which I think is a wonderful book. "Pop Art" is a great story; if you haven't read it, you should.

Posted by Chris Burdett at 4:04 PM