When I was in fifth grade, my gifted class went to the Bethesda Elementary library and the librarian gave us a presentation about some books she was encouraging us to read, books that were nominated for some award that year--it was a long time ago, and I was probably only half-way paying attention anyway, so I don't remember any details, but I think it was probably the Georgia Children's Book Award for the 1977-1978 school year. What I do remember her telling us as we all sat around a table at the back of the library, half a dozen books spread out before us, was that this book--she held up one of the volumes and showed us the cover--was science fiction and it was pretty advanced stuff, but if we thought we were up to the challenge we could give it a try.

That got my interest.

So I checked it out and read it, and absolutely loved it.

It was End of Exile by Ben Bova, perhaps the first "real" science fiction novel I ever read. I mean, a couple of years earlier I had loved The Wonderful Flight to the Mushroom Planet by Eleanor Cameron, but this was a whole different thing.

The next year, when I got to sixth grade and learned my way around the Sweetwater Middle School library, I was amazed and delighted to discover that End of Exile was actually the third book in a trilogy! (I don't think the librarian at Bethesda mentioned this--she may not have even known it--and apparently I didn't pay enough attention to the book jacket to come away with this information on my own. And really, I was only ten years old--what did I know from trilogies?) I immediately checked out the first two books, Exiled from Earth and Flight of Exiles, and then that third book (which I hadn't even known was the third book in a series when I read it) made SO MUCH MORE SENSE! 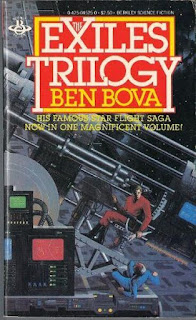 I read the Exiles trilogy every year that I was in middle school, and have read it a few more times since, though not in about twenty years--the list I keep of all the books I read tells me that in the year 2000 I read the first book (finishing it on my birthday, in fact) but that I didn't go on to read the second and third books, and have read nothing else by him in the 23 years I've been keeping that list. I have a paperback copy of the early 80's Berkley edition that puts all three books under one cover--"His famous star flight saga now in one magnificent volume!" the cover screams. I don't think I've ever actually read the copy I have now, but I intend to keep it forever.

In my mid twenties I tried reading a couple of Bova's other novels--he published dozens of them in a career that spanned six decades, and also many short stories, and a lot of non-fiction as well--but I couldn't get through them. It's not that they were bad, but nothing could live up to that experience of being ten years old and having my mind blown by End of Exile.

So, even though I haven't read that much of Ben Bova's work, and may never read anything else by him ever again, he is one of the Very Important Authors from my childhood, and for that I will always remember him with a great fondness.

(The winner of the Georgia Children's Book Award that year, by the way, was Freaky Friday by Mary Rodgers. I've never read the book, but I've seen the Disney movie--the version with Jodie Foster, not that version that was released years later--many times; I think I actually saw it in a theater when it first came out. John Astin, who was Gomez Addams on TV more than ten years earlier, plays the father. It's a decent little movie, not great, but not bad either. I recommend it if you haven't seen it. In fact, I recommend it even if you have!)

Posted by Chris Burdett at 4:19 PM